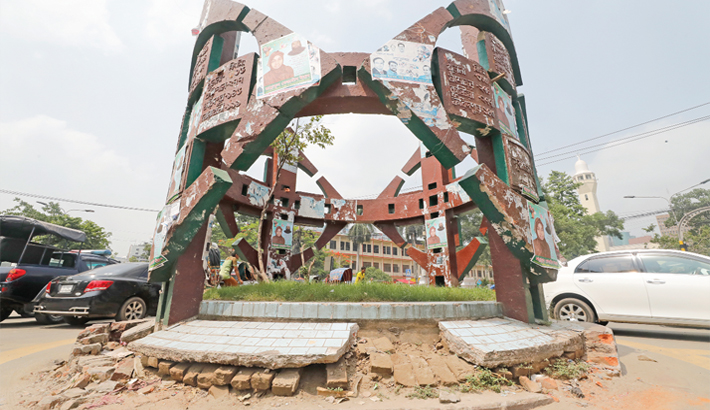 Noor Hossain Square named after pro-democracy martyr Noor Hossain is getting damaged due to lack of maintenance. The photo was taken from Gulistan in the capital on Sunday. — Kamrul Islam Ratan

Noor Hossain Square in the city’s Gulistan area has become awfully dilapidated as it has long been lying uncared for due to negligence of the authorities concerned.

While visiting the memorial concrete structure, the daily sun correspondent found that it has completely been obscured by banners and posters of local political leaders. Some parts of the structure are either damaged or missing.

Md Mizanur Rahman, zonal executive officer (Zone 1) of DSCC, told daily sun: “Our cleaners cleaned posters from the square regularly. But this is a place where every day new posters are pasted. We try our best to keep it clean.”

Some hawkers and businessmen around the square said the authorities concerned do not carry out essential maintenance work of the structure.

Dhaka South City Corporation (DSCC) authorities have not taken any initiative to maintain the beauty of the square, sources said.

Roadside vendor Sharif said that he had not seen anybody to take care of the square.

The Zero Point at the city’s Gulistan was renamed as Noor Hossain Square in memory of Noor Hossain who was gunned down by police at this place on November 10, 1987 while in a procession against the erstwhile autocratic regime of HM Ershad.

The name of Noor Hossain Square written on the wall of the structure has been covered with the posters of local political and labor leaders.

Although long time has passed, no memorial has been established in Noor Hossain Square. There is nothing written about Noor Hossain or his sacrifice for democracy.

Shuvo, a vendor at the footpath of GPO, said “Noor Hossain Square was written but the real name is Zero Point. Everyone calls it Zero Point.”

Student Kabir Hossain said “How do we know that it is Nur Hossain Square? There is no sculpture of  Nur Hssain nor his name inscribed on the structure.”

When asked about dilapidated condition of the structure, DSCC official Mizanur Rahman said: “I was not informed in this regard. As my attention was drawn, I will look into the matter.”