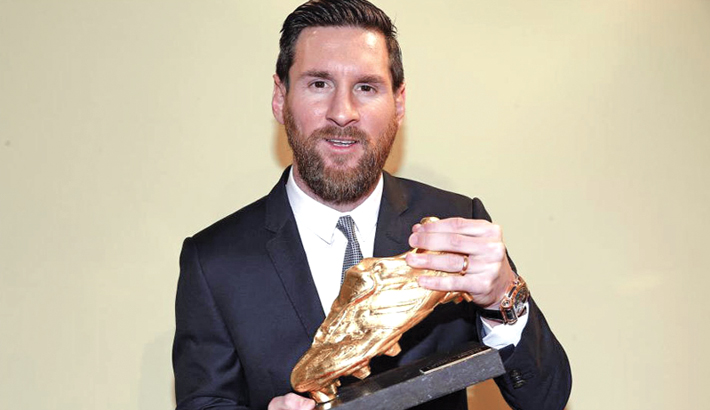 Lionel Messi poses for a photograph with the Golden Shoe.

Lionel Messi has won his sixth European Golden Shoe, awarded to the player with the most league goals in any of Europe’s top-flight leagues, report agencies.

Messi’s 36 goals in 34 games in LaLiga Santander this season meant that he finished three ahead of Paris Saint-Germain’s Kylian Mbappe.

Mbappe had to score five against Reims on the final day of the Ligue 1 season on Friday but could only manage one as PSG lost 3-1.

This is the third consecutive year that Messi has claimed the award and the 11th campaign in a row where the winner has come from LaLiga Santander, although Cristiano Ronaldo and Luis Suarez shared the Shoe in 2014.

Ronaldo was the last player not to play for a Spanish club to win the award, when he scored 31 goals in the 2007/08 Premier League campaign. The Portuguese has four Golden Shoes in total.

Messi has become the second oldest player to win the award with an age of 31 years, 11 months and 25 days. Hugo Sanchez was a month and a day older than Messi when he won the prize in 1990.

Despite this incredible achievement, Messi has admitted that Barcelona’s Champions League exit to Liverpool is still fresh in his mind.

“I’m not thinking about [the Golden Shoe],” he told reporters on Friday.

“I don’t have this award in my head. We’re still hurting from the Liverpool defeat, or at least I am. I’m not thinking about myself.

“Messi has warned that things could get even worse if Barcelona lose their Copa del Rey final to Valencia on Saturday.

“This is a final and not winning it would leave us much worse than we are now,” he noted.