Bangladesh take on Pakistan in warm-up 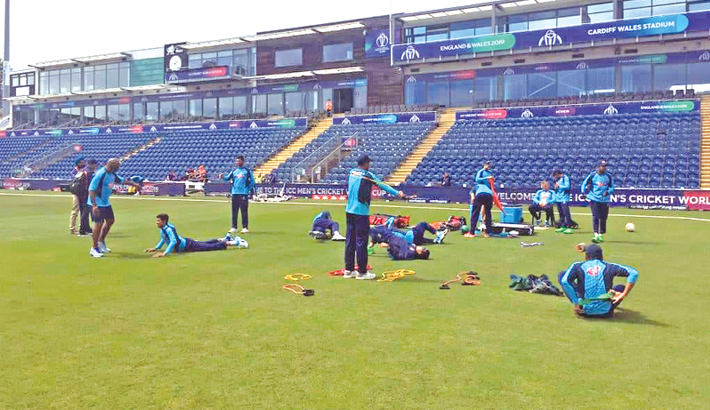 Bangladesh team players warm-up during a practice session at Sophia Gardens at Cardiff in Wales on Saturday.

Bangladesh will take on Pakistan in their opening warm up match for the upcoming ICC World Cup 2019 at Cardiff on Sunday.

This warm-up match will take place in Sophia Gardens, Cardiff at 3:30pm (BST) to help Tigers get down to business ahead of the global cricket extrgavanza.

Bangladesh will be looking forward to keep their winning momentum intact and get some good amount of confidence ahead of the showpiece event.

On the other hand, Pakistan will be eager to break their losing streak in the 50-over format as they lost their last ten ODIs and to make matters worse they followed that by losing to Afghanistan in their opening warm-up.

Pakistan began their World Cup preparation in the worst possible manner as they were humbled by England by a margin of 4-0 games largely due to their tooth-less bowling attack as the English batsmen dominated their bowlers throughout the series.

Pakistan included Mohammad Amir and Wahab Riaz in their squad to improve their bowling but it largely paid not dividend as they even lost their first warm up match against Afghanistan by 3 wickets.

On the other hand, Bangladesh is flying high with confidence after their amazing Tri-nation series win in Ireland.

It was Bangladesh’s first over multi-nation title so Tigers are currently high on confidence.

All of Tigers star players are in good form. Ace all-rounder Shakib Al Hasan didn’t play in the Tri-nation series final because of a side strain injury but it he seems that he is now fit before warm up match.

Like Pakistan, bowling is also a matter of concern for Bangladesh because bowler’s performance weren’t up to the mark in Ireland.

Bangladesh will want to test their squad depth in this match in order to find out their best combination for the upcoming World Cup matches.

Rubel Hossain, who had just recovered from a side strain before travelling to Ireland for the Tri-nation series, featured in one game for the Tigers during the tour, is looking forward to getting an opportunity in the warm-up game.

The 29-year-old vowed to fight for his place in the team and perform during the upcoming World Cup warm-up matches against Pakistan and India in order to get an opportunity in the playing eleven at the coveted tournament.

“I am doing well. I am completely fit; I have been bowling at full speed in the four to five practice sessions,” Rubel told reporters after the opening practice session at Cardiff. There is definitely tough competition, but I will surely try my level best to play my best cricket for the team.” he said.

Although Rubel is an experienced pacer, he is well aware of the competition for booking a spot in the playing eleven. Both Abu Jayed Rahi and Mustafizur Rahman had good performances in Ireland while Mohammad Saifuddin is also proving his ability as a medium pacer.

As a result, he is looking forward to the upcoming matches when Bangladesh take on Pakistan today and India on May 28 in Cardiff, to prove his worth.

“I certainly want to perform well in the upcoming matches. They will be crucial for me grabbing a spot in the playing eleven in the World Cup squad,” he added.