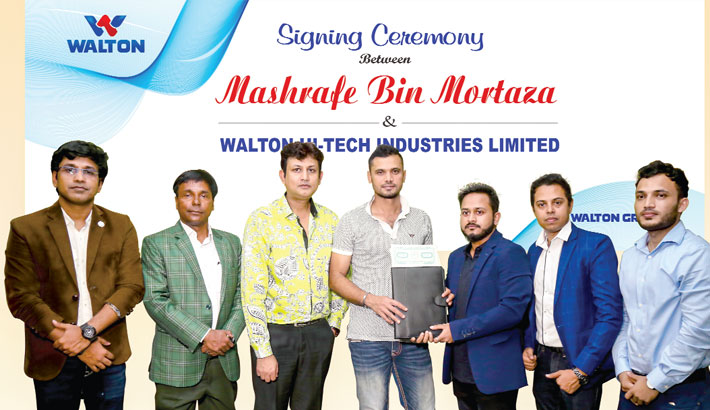 Bangladesh National Cricket Team skipper Mashrafe Bin Mortaza and Walton Executive Director Golam Murshed pose for a photo after signing an agreement at Mirpur in the capital on Tuesday.

Bangladesh National Team captain Mashrafe Bin Mortaza has been appointed as the brand ambassador of Walton.

The popular cricket all-rounder will be involved in various promotional activities of the country’s leading electronics, electrical, IOT and home appliances manufacturing company for next two years.

An agreement was signed between the Bangladesh skipper and Walton Hi-Tech Industries Ltd. in this connection.

Executive Director of Walton and its Refrigerator Department CEO Golam Murshed signed the agreement on behalf of his organization on last Tuesday at Mirpur in the capital.

About the endorsement deal, Mashrafe Bin Mortaza said: Walton is the leading electronics brand in Bangladesh. They have been working for a long time in the development of cricket here. I'm glad to be a part of Walton.