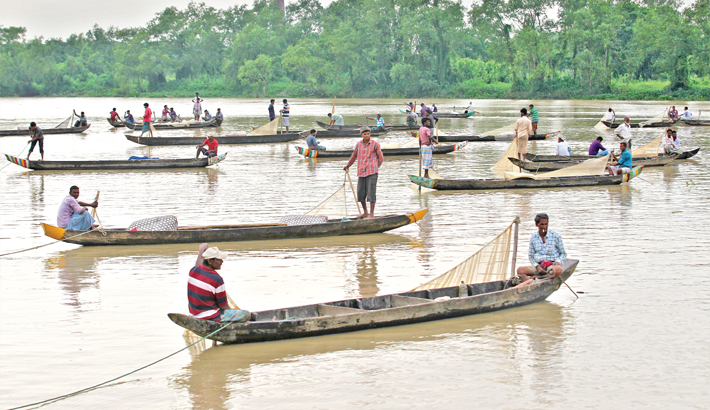 CHATTOGRAM: Mother fishes have started spawning in the Halda River, the country’s lone natural fish spawning centre in the district.

The egg collectors are also becoming ready to net the eggs in the river as they came to know about fish spawn in the river.

They are expected to collect spawn from different points in the river, including Azimerghat, Napiterghata and Amtua, sources said.

They hoped that they would be able to collect eggs hugely from the river this year as the local administration took a number of initiatives to keep the natural spawning centre undisturbed.

Hathazari Upazila Nirbahi Officer (UNO) Md Ruhul Amin said this is the fabourable time for the mother fishes to release eggs in the river.

“Some 400 egg collectors are now waiting for release of the fertilised eggs in the river. The local administration is also prepared to facilitate their activities,” he said.

So far, 56 drives have been conducted against the illegal catching of mother fishes, operating motorized boats and dredgers in the river during the eight months to save the mother fishes, he said.

Besides, the worn-out wells for hatching the eggs have also been  repaired, said the UNO.

During the months of Baishakh and Jaishtha (April and May), carp fishes start migrating from the Karnaphuli, Matamuhuri and Sangu rivers to the Halda river .

Usually, in the first rain of the monsoon, mother fish start releasing fertilised eggs in the river.

The fertilised eggs are released in hatcheries and several hundred wells dug out along the banks of the river for hatching.