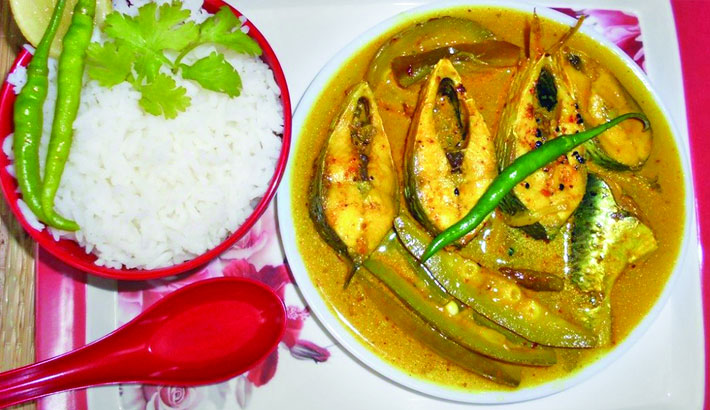 Bengali feast is incomplete without the Hilsa. There are two varieties of Hilsa -- Tenualosa ilisha and Tenualosa toli ilisha -- found in the marine and fresh waters of Bangladesh. Among them fresh Hilsa is tastier than marine Hilsa. Hilsa is considered as one of the tastiest fish due to its distinctly soft oily texture, mouth-watering flavour and superb taste.

The nucleus of taste and flavour in fish is constructed by the synergistic effects of glutamic acid and neocleotides along with sodium and chloride ions. The core flavour is enhanced by other taste active amino-acids, mainly taurine and arginine, and nucleotides and inorganic ions. Flavour volatiles, lipids, fatty acids and glycogen also play important role in producing overall flavour. The unique taste of Hilsa has often been attributed to the presence of certain fatty acids like steareic acid, oleic acid and many polyunsaturated fatty acids, viz., lenoleic, lenoleneic, arachidonic, eicosapentanoeic and docosa-hexanoeic acids.

Hilsa is tastier just before the spawning than post-spawning or maturing stages. During pre-spawning time, lipid content in female Hilsa generally range from 16 to 22 per cent. Female Hilsa grows faster, becomes larger and tastier than the male of same age group. Riverine Hilsa, especially those from the River Padma, are tastier than marine ones.

The taste and flavour of many fish sometimes depend on their food and feeding behaviour. Planktonic mollusk, Spiratella helicinia fed by fish gives rise to an off-flavour in marine fish muscle, often described as “petrol” flavour.  Godavari Hilsa was found to be tastier than marine Hilsa in Indian waters of the Bay of Bengal. During its time at sea Hilsa remains short, thin and less tasty but when it enters in freshwater its taste and growth increases. During migration it is sustained by the accumulated fat in its body. Therefore, fat content decrease in the sea due to the brackish water, than further to the rivers.

Fatter Hilsa migrates faster and loses fats prompter in the rivers. Comparatively lesser fats in the river than their accumulation in the marine environment makes the flesh more soft and relaxed. During low salinity directed spawning migration, saturated fatty acids (depot fat) are converted first into mono- and then into poly unsaturated fatty acids.

On the other hand, as the fish does not take food or take less food while in the rivers, most of the off-flavours imparted in the muscles from the food and mud in marine/brackish water are reduced. So we can say that, because of having polyunsaturated fatty acid and feeding habit are responsible making fresh water Hilsa tastier.