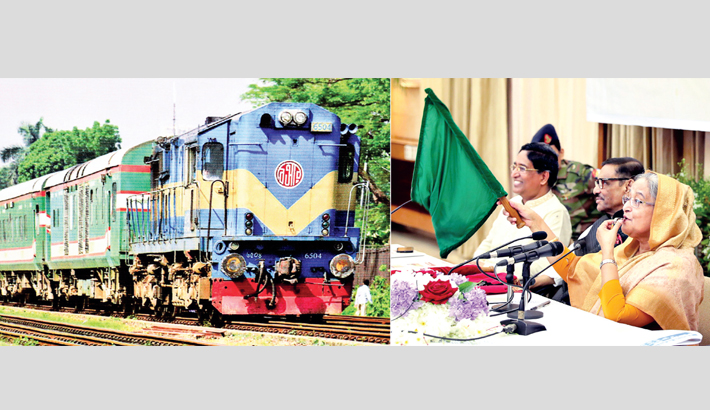 Prime Minister Sheikh Hasina on Saturday urged the people to have patience during severe congestion in the capital for the ongoing construction work of the metro rail project.

“People living in Dhaka are suffering due to the ongoing construction work of the metro rail. I urge them to have patience for having a better transport system,” she said.

“I hope there will be no suffering after the completion of the work.”

The premier came up with the remark while inaugurating the much-awaited four-lane 2nd Meghna Bridge and the 2nd Gumti Bridge on the Dhaka-Chattogram highway through a videoconferencing from her official residence Ganabhaban.

“Measures have been taken in a way so that some 60,000 passengers can travel every hour,” she said.

Roads stretching from Uttara-Mirpur-Shahbagh-Motijheel have become narrow due to the ongoing construction work, resulting in an untold suffering of the passengers of various modes of transport.

The premier said the Awami League returned to power 21-year after the assassination of the Father of the Nation Bangabandhu Sheikh Mujibur Rahman.

“After assuming office, we have been able to bring in development for the country and the people. I am grateful to the people as they keep faith in me to serve them,” she said.

The premier also asked the authorities concerned to procure modern passenger coaches and wagons for Bangladesh Railway to meet the growing demands.

She also emphasised achieving the capability of locally building modern wagons and coaches. The premier urged the drivers to go by the traffic rules to avoid accidents

The premier said the aim of her government is to improve the living standard of people and free the country from poverty.

She said the newly-constructed bridges would be very much helpful for the socioeconomic development of the country.

“These bridges will help boost regional cooperation,” she said.

Terming Bangladesh the role model of development in the world, the premier urged all to maintain the pace of the development.

Later, she spoke to a cross-section of people in Munshiganj, Cumilla, Gazipur and Tangail through the videoconference.

Later, the government extended the deadline for six months by re-fixing it in December 2019. But, the construction of the bridges has been completed around seven months before the schedule.

The work on the around 400-metre new Kanchpur Bridge, with a cost of Tk 950 crore, was completed in December 2017 and the new one is two metres wider than the old one. The authorities have already started renovation work on the old bridge.

The construction of the new 930-metre Meghna and 1,410-metre Gumti bridges was completed spending Tk 1750 crore and Tk 1950 crore respectively.