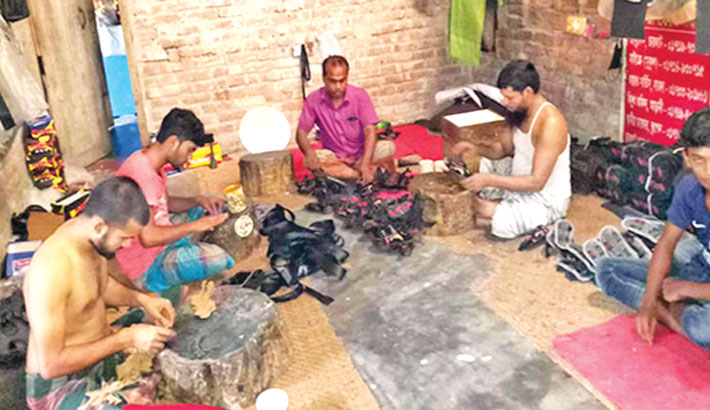 RAJSHAHI: Workers and owners of most of the shoe and other footwear factories at Kaluhati village in the district are passing their busiest days ahead of the forthcoming Eid-ul-Fitr festival, reports BSS.

More than 5,000 shoe workers are working in the factories while another 2,000 women laborers are making shoe boxes.

While visiting to the village, nearly 30-km away from the Rajshahi city, recently this reporter found that the factories are manufacturing adequate finished products to meet the Eid-based demands of shoe and other footwear items in the country’s northwest region.

The village under Charghat upazila is famous for its footwear products among businessmen from different parts of the country. The village has around 50 shoe factories employing around 6,200 male and female workers.

They supply shoes to most of the districts in the northern region. The factory owners are getting massive responses from all quarters which is a positive sign of furthermore expansion of the business. Apart from working in the factories, many women have already become small-scale entrepreneurs of manufacturing shoe-packets, bag, key-ring, purse and wallet.

The families are taking advantage of establishing such type of factories with small investment with their family members successfully.

The sources said each of the factories is now functioning round the clock ahead of the Eid although some of those remain in idle in other time of the year. The demand for footwear produced in these factories increased heavily this time in compared to the past.

Shoe-maker Firoj Ahmed said each of the workers earns at least Taka 12,000 to 15,000 during the Eid season. Abida Sultana, owner of a packet and box factory, said their goods are sold in both wholesale and retail markets. She said, “We receive more orders in Eid season.”

Abdul Mannan, president of the association, said their business is facing competition due to the imported footwear. He also said the shoes and sandals manufactured in the village have earned fame throughout the country.

“We are supplying products of at least 40 designs to most of the districts in Rajshahi and Rangpur divisions and some districts in Khunla division at present,” he added.

He mentioned that State Minister for Foreign Affairs Shahriar Alam, MP, had taken some time-fitting steps to take the industrial sector forward in 2014.

With his initiative, Dhaka Bank Limited provided a loan of Taka one crore in the same year. Last year, the bank also provided another loan of Taka five crore through SME Foundation that has now been adjudged as the turning point for the industry owners.