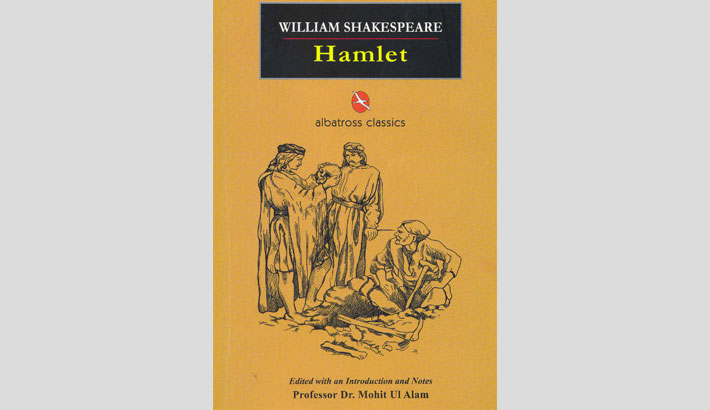 The book that I have reviewed today is Mohit Ul Alam’s edition of Hamlet published from albatross classics in 2019. Without doubt, Alam worked really hard to complete his edition which has no dearth of interesting information. I have not read any other works as condensed as Alam’s one on Hamlet. After going through the book’s introductory part, readers, who are willing to enhance their intellect, would look at Hamlet beyond their preconceived notions as depicted in substandard Indian notes. Like a real scholar, Alam was not content with his own knowledge on the play. The Shakespearean scholars Stephan Greenblatt, Department of Humanities, Harvard University, David Scott Kastan, editor, Arden Shakespeare and Professor George M. Bodman, Yale University and our very own Dr. Fakrul Alam, East West University shared their inputs to make Alam’s edition of Hamlet analytically driven. With this work, Alam has made the whole Bangladesh proud. It is a critical book of international standard.

Alam tries to understand Shakespeare’s Hamlet from the story of Nawab Serajuddola, who was betrayed by Mir Jafar. Although the battle of Plassey took place in 1757, almost 156 years before Shakespeare would start to write his play, yet Alam thinks that Shakespeare; had he had the options, would have used the murder of Serajuddola into the intricacies of his plot. Many of Alam’s interpretations border on biographical and intentional fallacies. Alam, like his mentor, Stephan Greenblatt, tries to analyse Shakespeare works from what Shakespeare would have done had he had more scopes to include so and so texts. I think, we tend to complicate Shakespeare by laying too much emphasis on our assumptions that may not have significant anecdotal values.

In Bangladesh, I do not think, many scholars would dare to write an edition of Hamlet in academic English. If I were in Alam’s position, I would focus on my general readers: students; plenty of whom do not read the original texts, let alone analyses of abstruse thoughts. Perhaps, Alam’s book might not be sold much. Students will not find it to be a friendly text. If they want to be learners eager to improve their command over English, then there is no better book than this albatross book on Hamlet from Bangladesh. I laud Alam for his brave attempt. He tries to satisfy his own soul. If he had written the book from a surface level, he would have been a crowd-pleasure. It would not have pleased his soul. The book would have been commercially successful. There is no fun in earning money if the soul one is working to make it happy suffers because of the inflicted greed of money. The book largely ignores Sigmund Freud’s “Oedipus Complex”. He could have focused more on the unusual usual mother-son relationship. Alam could have brought in Jacques Lacan and Jacques Derrida. He could have discussed Hamlet post-colonially. I know, plenty of works have been done on Shakespeare from different angles. Shakespeare is never old. Hopefully, Alam would bring out a larger issue next time.

Again, this book has given me so much to learn from. It delves on the law of primogeniture which would have given Hamlet the start to his reign. Claudius bysidestepping Hamlet violates the constitution and becomes the illegal king of Denamrk. In the Elizabethan and Jacobean times, kings were looked upon as demi-Gods highlighted no further than in E.M.W. Tilliyard who says, “In the earth God hath assigned kings princes with other governors under them, all in good necessary order” (quoted in Alam, xxxiii). Alam points at the divine right of king that denies Hamlet with the rightful ascension to kingdom. The ghost of Hamlet says, “Do not forget. This visitation/ Is but to whet thy almost blunted purpose” (Hamlet 3.4. 124-5, quoted in AlamIxi).  Hamlet’s ghost urges him not to forget his father’s murder. The spirit also wants Hamlet to enact revenge on the murder. By showing the ghostly presence, Shakespeare shows how a father wants to live through the image of his son. Shakespeare’s son Hamnet died in 1596. His father John Shakespeare lost his life in 1601. Shakespeare’s father’s death was natural. However, it was difficult for the father Shakespeare to come out of the grief of his son. Alam thinks that the plea of Hamlet’s ghost reminds Shakespeare of his son’s voice, the voice of his ailing father, and perhaps his own voice after death” (Alam, Ixi). Alam argues that Hamlet avenges, but not the right man.

Alam deals with the theme of misogyny. He thinks that Hamlet is male-chauvinistic because of enforced circumstances. His mother’s moral derelictions have compelled him to view women negatively. Hamlet boisterously claims to her brother Laertes “I lov’dOpehelia. Forty thousand brothers/ Could not with all their quantity of love/ Make up my sum” (Hamlet 5.1. 277-8,quoted in Alam, Ixvii). Alam claims that Hamlet’s love for Ophelia is more valuable than that of others. He counts the amount of love monetarily. By doing so, Hamlet objectifies her. He looks to buy her love with money. Alam does not discuss the mysterious death of Ophelia. Hamlet does not kill Ophelia but he verbally abuses her. His discourses hurt Ophelia’s ego. She is unable to bear the pain anymore. She finds her voice in snuffing out her own life. That is her protest against Hamlet. Her death haunts Hamlet for some days. In fact, it starts his killing spree that puts him in the category of a serial killer; a psychopath. Alam evades this part.

Alam makes elaborative comments on Hamlet’s seven soliloquys. One of Shakespeare’s most famous soliloquys is

“To be or not to be: that is the question:

Whether ‘tis nobler in the mind to suffer

The slings and arrows of outrageous fortune,

Or to take arms against a sea of troubles,

And by opposing end them?”

Here, Hamlet ponders over. He does not know whether it will be right for him to kill his uncle or kill himself. Both go against his creed in Christianity. Alam alludes to some critics’ observation on the scene. In Alam’s book, it is depicted that Hamlet has a delaying nature. He is not ready to make his decision for which he is bringing religion into the thoughts of his delaying nature that disrupt his flow. Another critic Philip Edwards criticises Hamlet for his delayed nature. He says, “Hamlet means what he says in the prayer scene. The procrastination theory held that once again Hamlet was finding some excuse for not acting” (quoted in AlamIxxix). Whether Hamlet is a killer or not, we need to find it out by reading Hamlet.

For going deep into Hamlet’s mind, Mohit Ul Alam’s book on Hamlet is of great help. It is a book that should not be burnt for its unorthodox interpretations and difficult languages. We need to come out our habit of reading cheap bazaar notes. Our English is of substandard quality. Now is high time to read critical books written scholarly. If we all go for easy-made things, knowledge will become cheap. Knowledge is not a commodity. To earn knowledge, we need to squeeze a dry lemon and make juices out of it. We need to know the techniques of doing that. Nothing other than book-reading helps us do that. This generation reads. Let us not underestimate them. Let us continue to inspire them to read and think. Nothing is impossible.

The writer is a Lecturer, Department of English, Chittagong