Brazilian town waits as another dam at risk 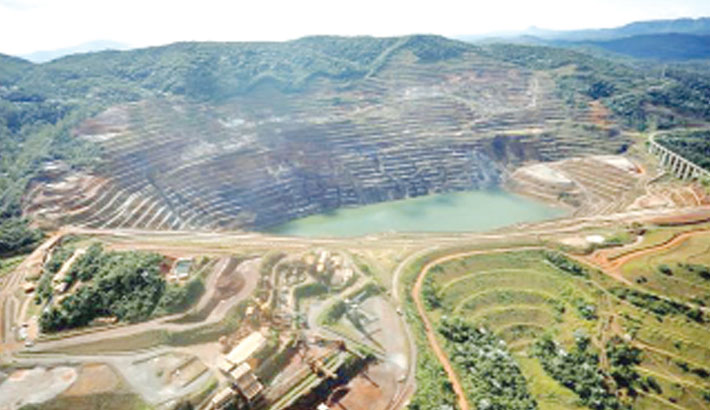 The thick layer of mud which buried 270 people in Brumadinho has barely dried. Certainly, the scars of Brazil’s worst mining disaster are still raw, reports BBC.

Yet, within just four months, another community in the south-eastern state of Minas Gerais faces being obliterated from the map by a torrent of mining waste.

The monitors in the hastily-assembled civil defence headquarters in Barão de Cocais display real-time images of the stricken mine, Gongo Soco, and the associated Sul Superior dam about 1.5 km (one mile) from it. All eyes in the room are nervously fixed on the mine as it teeters on the brink. Mining company Vale, which owns the complex, warned last week that the embankment could collapse at any time this week.

“The wall of the Gongo Soco mine could rupture any day,” says José Ocimar of the civil defence authority. “That could create an impact and a vibration which could trigger the collapse of the dam below.” It is a grim assessment for the communities living nearby although hundreds of people in the immediate impact area have already been evacuated.

“We can’t be completely sure of what’s going to happen but we’re taking the necessary precautions to prevent the loss of human life,” insists Mr Ocimar.

The small mining town of Barão de Cocais of some 30,000 residents lies in the path of the potential mudslide. Dotted around the quiet central plaza are the details which show that something is amiss.

The pvements of the streets inside the flood zone have been painted orange. Some shops, banks and even the post office have been closed for days, and an evacuation route has been marked out with signs.

It is unsettling, says Talita, a 21-year-old apprentice. “Everyone is tense. Everyone is scared. We don’t know how to react,” she says, gesturing at a group of workmates sitting on the park benches.

“It’s sad to see people desperate and so unsure of anything, of when it will collapse or if they’ll have a home to return to. Even if there will be clean water to drink.”

In the worst-case scenario, Barão de Cocais would have about one hour and 15 minutes to evacuate. In a recent drill the town was cleared within about 50 minutes.

But some fear it was not a realistic reflection of the panic that would happen if the alarm catches them off guard. Or worse still, while they are sleeping.

Both the Córrego do Feijão mine, where Brumadinho was located some 60km from here, and Gongo Soco are owned by the Vale, Brazil’s largest mining company, which refused our request for an interview.

The firm has traditionally been a source of work in Barão de Cocais but people are angry at what they see as its relentless pursuit of profit.

“I’m afraid I don’t have a good impression of Vale,” says Gilmar dos Santos, a car mechanic. “It seems the company put their profits above everything else. People’s lives are just not a priority.”

Mr Santos is worried about his family’s ability to flee in a hurry. His elderly parents are particularly vulnerable.

We walk to a nearby house to visit his mother, Cilta Maria, as she waters the orchids in her garden. A vigorous woman in her 80s, she admits she would have real difficulty in evacuating the home she has lived in for 48 years.

“I’m trying to stay calm. We get apprehensive and worried so every night one of my kids comes to sleep here. If something happens, they’re already here. But it’s hard.”

This is not least because her husband, Raimundo, has advanced stage Alzheimer’s. He sits smiling passively into the mid-distance, unaware of the impending disaster threatening his town.

Cilta Maria resents having to go through this at their age. “We never thought this would happen here in Barão. They told us the mine was development, was progress. And now I guess we’re suffering the consequences.”

Meanwhile, for the family members of the victims of Brumadinho, watching the crisis unfold at Gongo Soco has caused new distress. For them, it is evidence that nothing has been learned from the deaths of their loved ones just weeks ago.

Rimarque Cangussu’s daughter, Marcelle Porto, was a doctor working in Brumadinho at the time and the first victim to be formally identified. “It was a terrible, overwhelming blow, a loss that I’ll never recover from,” says Mr Cangussu, a civil engineer, adding that there is a pattern of negligence taking place.

He points to the collapse at a Vale mining dam in Mariana in 2015, Brazil’s worst environmental disaster. To the questionable mining practices and poor safety standards at Brumadinho. To the assurances given by Vale, the state and federal government that changes would be made to prevent a repeat.

None of it, he says, has made the slightest difference.

“It wouldn’t surprise me if there’s a similar tragedy in Barão de Cocais. It is a sensation of impotence, indignation and dismay that things don’t work as they should.”