Glimpses Of Nazrul Through The Lens Of East Bengal 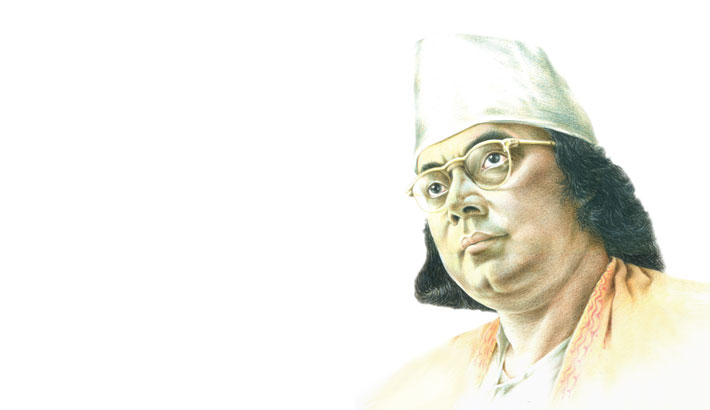 As a human being Kazi Nazrul Islam was restless. In his 43 years of active life he chose different paths. He worked as a muezzin in a mosque, performed for a rural theatrical group Letor Dal, served in a restaurant, joined the British Indian Army, became a journalist and an editor of a newspaper, took part in politics, established himself as a brilliant poet and writer, penned and composed outstanding songs and directed music for Gramophone Company. While embracing diverse professions and exploring new regions he had travelled to many places including Raniganj, Asansol, Trishal, Karachi, Hooghly, Krishnanagar, Kolkata, Cumilla and Dhaka. Among all his stays in different areas his sojourn in East Bengal was truly crucial. In the golden days of Nazrul’s life the whole sub-continent was operated from Kolkata. Being the capital of British India it was the center of all administrative, commercial, political and cultural events. Nazrul also had to spend most of his life there due to professional reason. Back then, East Bengal was a backward region where most of the dwellers were underprivileged. But Nazrul never ignored these disadvantaged people rather he repeatedly came here and felt the warmth of their hearts. His sojourn in East Bengal on a regular basis not only influenced his literary creations but also enriched the literary and cultural practice of East Bengal. And all these together had determined the future way of looking at Nazrul and his works, and his evaluation. Kazi Nazrul Islam was born on May 25, 1899, (11 Jaishtha, 1306, according to the Bangla calendar) in the village of Churulia near Asansol in Bardhaman district of the then Bengal Presidency. Ahead of the 120th birth anniversary of this literary giant, this week ‘morning tea’ will focus on the role of East Bengal in Nazrul’s life and creations.

While studying in Bardhaman’s Mathrun NC Institution, poverty-stricken Nazrul had to work as an assistant cook in a Bangali Christian family. After returning from there he started working at a restaurant in Asansol. Then he was acquainted with Kazi Rafizullah, a police officer, who became surprised to see the blazing literary genius in the young man. He got shelter in his home and returned to school. Within a few months Rafizullah was transferred to Mymensingh’s Trishal. In the mid of 1913 he took Nazrul there with his family members and got him admitted in class seven at Darirampur School. He obtained full-free scholarship and secured first place in the annual examination. According to Professor Mohit Ul Alam’s article ‘Nazruler Trishal’, during this period he worked as a lodging master at Kazir Shimla’s Daroga Bari and Bicuhtiya Bepari’s home in Namapara villlage. Leaving Trishal Nazrul suddenly returned to Churulia at the end of 1914 but he never forgot Trishal which was evident in his written speech presented in a farmer-labour council in Mymensigh in January, 1926. 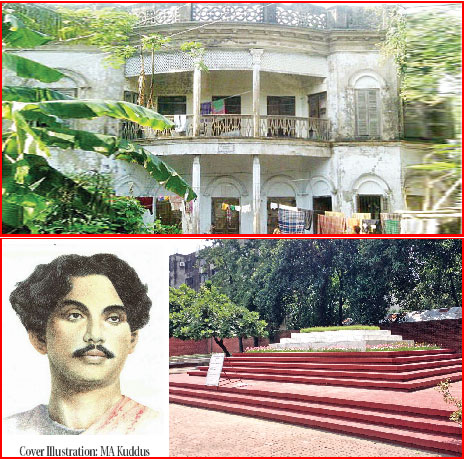 his invitation Nazrul came to East Bengal for the second time on April 4, 1921. While taking Nazrul to his village Cumilla’s Daulatpur, Khan took a break at Indrakumar Sengupta’s house in Kandirpar where Nazrul was introduced with Sengupta’s wife Biroja Sundari Devi. He began to call her ‘ma’. There he also met with Biroja Sundari’s widowed sister-in-law Giribala Devi and her daughter Dolon (who was later known as Promila). Then Nazrul went to Khan’s house and while staying there he penned some marvelous poems and songs like ‘Obelay’, ‘Har mana har’, ‘Papri khola’, and ‘Onadrita’.

During this time Nazrul was attracted by the beauty of Ali Akbar Khan’s niece Sayada Khatun Nargis. Soon their acquaintance led to a more serious relationship and the issue of marriage came up. The marriage was scheduled to be held on June 17, 1921. But Nazrul walked away on the night of the ceremony as Ali Akbar Khan included a precondition in the marriage contract that ‘Nazrul must reside in Daulatpur permanently after marriage’ which was unacceptable and disgraceful for him. There is a controversy related to whether Nazrul married Nargis or not. Mahbubul Haque in his book Nazrul Tarikh Obhidhan and Abid Anwar in his article ‘Eknojore Bangladeshe Nazrul’ claimed that the Aqd of marriage was completed between Nazrul and Nargis but Nazrul’s political mentor Muzaffar Ahmed rejected this claim in his book Kazi Nazrul Islam Smritikotha. However, from the wedding house Nazrul went to Biroja Sundari’s house and before returning to Kolkata he wrote there a few poems including ‘Biday belay’, ‘Bedona obhiman’, ‘Bidhura pothik priya’, ‘Haramoni’, ‘Manosh bodhu’ and ‘Moner Manush’. He came to Cumilla again on November 18, 1921, and stayed in Kandirpar. This time he penned a song ‘Bondona gaan’ and some poems including ‘Nishith pritom’ and ‘Bijoyini’. It was a time when the British Prince of Wales visited India. Protesting this visit Nazrul joined the agitated people of Cumilla hanging a harmonium in his shoulder. He was arrested by police for a day for writing and performing a song ‘Jagoroni’.

The poet came to Cumilla for the third time on February 16, 1922, and stayed there for four months in Biroja Sundari Devi’s house. Gradually he developed a love relationship with Promila. During his stay in Kandirpar Nazrul wrote some poems like ‘Proloyollash’ and ‘Priyar rup’ and lyric of songs including ‘Shayok bedha pakhi’ and ‘Chirochena’. At the end of June he returned to Kolkata. Nazrul brought out a bi-weekly newspaper ‘Dhumketu’ as the editor on August 11, 1922, and published his metaphorical poem ‘Anondomoyir Agomone’ on September 26, 1922. Consequently the British government banned the autumn issue of the bi-weekly and Nazrul came to Cumilla’s Kandirpar. He was arrested by police and taken to Kolkata on November 23, 1922. The poet was sentenced to one year imprisonment in charge of sedition on January 16, 1923. While staying in jail he began a hunger strike protesting the mistreatment by a British jail superintendent. Nazrul broke his hunger strike 39 days later following the request of Biroja Sundari Devi. He was released from jail on December 23, 1923. After that Nazrul came to Cumilla again and asked for the hand of Promila to her family. But none of the family members except Promila’s mother Giribala Devi was interested about this proposal. Then Nazrul went to Kolkata and took Promila and Giribala Devi with him. He married Promila on April 25, 1924.

Kazi Nazrul Islam came to East Bengal again on May 1, 1925, to attend the provincial council of Congress in Faridpur where he sang his famous songs ‘Shikol pora chol’, ‘Chorkar gaan’, and ‘Jater name bojjati’ in front of Mahatma Gandhi and Chitta Ranjan Das. There he met with poet Jasimuddin who helped him in the subsequent years. Nazrul contested from East Bengal for a seat in the upper house of the central legislative council and in November same year he came to Faridpur for the second time to conduct his election campaign. He went there on January 27, 1936, and again on August 12, 1941, to chair the District Muslim Students’ Council. Nazrul came to Madaripur on March 10, 1926, to attend the Bengal Fishermen Council where he performed a song ‘Amra ar niche pore roibona’. He visited Noakhali from June 15 to 20, 1927, when he was given warm receptions by the residents of Noakhali and Laxmipur. He received similar reception in Sylhet on October 9, 1928. Nazrul went to Narayanganj on September 14, 1935, along with singer Abbasuddin Ahmed to attend a function. According to Nazrul’s biographer Azhar Uddin Khan, the mass people of East Bengal expressed their unconditional love towards their favourite poet during his visit to different areas of Dinajpur, Rangpur, Kurigram, Thakurgaon, Rajshahi, Bogura, Sirajganj, Kushtia, Khulna, Bagerhat, Jashore and Barishal from 1924 to 1932.

Nazrul researcher Professor Rafiqul Islam observed in his article ‘Bangladeshe Nazrul’ that Chattogram was one of the places that influenced Nazrul’s creations to a great extent. He went there for the first time on July 26, 1926, following an invitation by Habibullah Bahar and his sister Shamsunnahar Mahmud. Most of the poems of his poetry compilation Shindhu-Hindol were written during his stay in Chattogram. He penned his popular poem ‘O-namika’, ‘Gopon priya’, ‘Shishu jadukor’, ‘Shindhu- prothom, ditiyo o tritiyo torongo’, and ‘Kornophuli’ there. Nazrul came to Chattogram again on January 3, 1929, and spent a month exploring the amazing natural beauty of its sea, rivers, hills and fountains. He wrote many poems like ‘Batayon pashe gubak toru’, ‘Ogo o chokrobaki’, ‘Badol rater pakhi’, and ‘Stobdho rate’, which are included in his poetry compilation Chokrobak. Besides, lyrics of his songs ‘Ore majhi bhai’, ‘Amar shampan’, ‘Ki hoibo lal bauta’ and ‘Tomar kule tule’ were written there. He visited the house of Muzaffar Ahmed in Sandwip on January 28. Nazrul graced the Chattogram District Literary Festival as the chief guest on May 7, 1933, where he sang songs and recited poems.

Kazi Nazrul Islam visited Dhaka for the first time on June 24, 1926, responding to an invitation by Muslim Shahitto Shomaj. There he met with poet Abdul Quadir, linguist Dr. Muhammad Shahidullah, Buddhir Mukti Andolon’s organiser Kazi Abdul Odud, and writer Abdul Majid Shahityaratna. In the council of Muslim Shahitto Shomaj held in Salimullah Muslim Hall on June 27 and 28, he delivered a speech, sang some ghazals and recited his most celebrated Islamic poem ‘Khaled’. Professor Rafiqul Islam stated in his article ‘Bangladeshe Nazrul’ that, being impressed by the liberal thoughts of Dhaka’s Muslim scholars Nazrul told that it was his whole life’s dream to see that the Muslims are coming out from there age-old stereotypes. He said he will publicise that the Muslims of Dhaka have begun a new journey for revitalising their community.

According to researcher AKM Shahnewaz’s article ‘Dhakay Kobi Nazrul’, the rebel poet visited Dhaka again in the first week of February 1928 to inaugurate the second council of Muslim Shahitto Shomaj where he sang his popular song ‘Chol chol chol’. Lyric of this song was published in a magazine named ‘Shikha’. Later it was also printed in ‘Progoti’, a magazine edited by Buddhadeva Bose and Ajit Dutta. Then he penned lyrics of a few more songs such as ‘E bashi basore’, ‘Nishi vor holo’, and ‘Amar kon kule aj virlo tori’. During this sojourn in Dhaka he was acquainted with Dhaka College’s principle Surendranath Mitro, his daughter Uma Moitreo and singer Ranu Shome (Protiva Bose). Nazrul was invited at Jagannath Hall by its Provost Ramesh Chandra Majumdar where he performed a few songs. While staying in the house of his friend Professor Qazi Motahar Hossain he got familiar with Dhaka University’s meritorious student Fazilatunnesa and fell in love with her. Later he wrote a few letters and gifted some books to her but Fazilatunnesa’s reluctance had hurt him. Nazrul visited Dhaka again on October 21, 1934, on the occasion of poet Abdul Quadir’s marriage ceremony. He directed music of Sachin Sengupta’s drama ‘Jhorer Rate’ which was aired from Dhaka Betar on March 26, 1940. He came to Dhaka for the last time before his illness on December 16 of the same year to attend the first founding anniversary of Dhaka Betar Kendra and scripted and directed a musical programme ‘Gitali’ there. During his journey towards East Bengal he wrote the lyric of his songs ‘Poddar dheure’ and ‘Ami purob desher puronari’.

Albeit Nazrul vehemently opposed the British government and claimed for the independence of India in written editorials, he couldn’t feel the joy of independence due to his illness. He lost his voice and memory in July, 1942. When Bangladesh obtained independence, with consent of the Indian government, Bangabandhu Sheikh Mujibur Rahman brought Kazi Nazrul Islam and his family to Dhaka and honoured him as the National Poet. Recognising his lifelong contribution to Bangla literature and culture, Dhaka University conferred an honorary DLitt degree upon him on December 9, 1974. In January 1976, the government granted him the citizenship of Bangladesh and awarded him the ‘Ekushey Padak’ on February 21. The poet died on August 29, 1976, at Dhaka’s PG Hospital (now BSMMU Hospital). Nazrul was buried with state honour beside the Dhaka University Mosque in accordance with his wish as expressed in one of his songs.