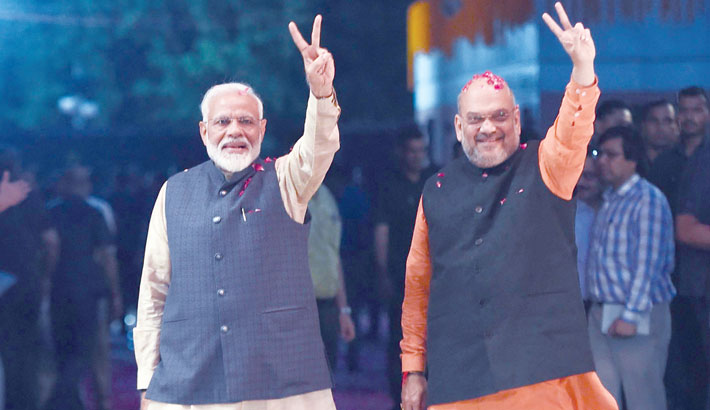 Prime Minister Narendra Modi is set for the second term as the saffron-painted much of the map of India with lotus blooming in full saw an unprecedented and historic polls ever in this South Asian country, according to the voting trend on Thursday.

In his first tweet after the people’s mandate, Modi said: “Together we grow. Together we prosper. Together we will build a strong and inclusive India. India wins yet again. #Vijayi Bharat.”

Chinese and Russian leaders were among the first to congratulate Modi.

Bangladesh Foreign Minister Abdul Momen told reporters in Dhaka that Indian Prime Minister Narendra Modi was the first foreign leader who called his Bangladesh counterpart soon after the re-election of her ruling Awami League in the last election.

The exit polls apparently have proven correct in this election as 90 million people voted the man who had been shown the red by the western media ahead of the general election including the Time, Economist and Guardian.

The trend showed 344 for the Bharatia Janata Party (BJP) of Modi and his National Democratic Alliance while 94 for Rahul Gandhi’s Congress Party and 106 to others.

The final results were expected on Friday as counting continued till the filing of this report at 18:00 PM Indian time.

BJP alone got 291, a gain of nine seats, while the Congress also gained by 11 seats to 55 singularly in comparison to the 2014 national elections.

Political observers here said such a thumping victory was definitely an historic and unprecedented result in India’s history and it was a vote for or against Modi, who has been able to convince the electorate — especially the youths under 22 — that he was the real leader with his quick and successful air strikes inside Pakistan following the terror attack that killed 40 Indian soldiers last year.

“Nationalism worked very much ... it is not a landslide, it is a huge wave,” said one senior journalist.

Modi’s micro-economics also paid off well which drew women and honest business men to his leadership.

Suhasini Haider, diplomatic editor of the Hindu newspaper, told this newspaper that “looking at the past five years, I am sure bilateral ties between Dhaka and New Delhi will be further strengthened.”

In places where BJP has won, celebrations were under way. Sweets were being distributed —- all white “rasgollas”.

Prime Minister Modi has convened a meeting of BJP’s parliamentary board for late Thursday and if all goes ahead without any hitch, sources here said the swearing in of the new government is likely to take place by 26 May.

Meanwhile, at his hometown in Gujarat, the prime minister’s elderly mother greeted a huge cheering crowd gathered outside her home.

Congress leader Abhishek Manu Singhri said his party bows down to people’s mandate if the trend of a landslide to Modi comes out correct when the official results are announced.

“We (Congress) need to reinvent, but it will take time,” he added in comments to NDTV.

Congress leader Priyanka Gandhi drove to the home of her brother, Rahul Gandhi, who made a pitch for the prime minister’s office and had rubbished the exit polls.

TV reports said the siblings of the party leader and mother Sonia Gandhi are apparently meeting for their next steps.

One Congress source told the daily sun a lot was in question after the poll debacle, including if Rahul Gandhi should step down as the party president or continue or his sister Priyanka Gandhi will take over.

“A lot of soul-searching needs to be done,” he said.

Media reports that the Congress was in a state of “shock and in total disarray.” One BJP leader said the law would facilitate the living of those Hindu, Christian, Jain and Buddhist refugees from Bangladesh and Pakistan as they were facing persecution.

The Muslim minorities in India would have a place if they could prove they were facing problems in their home countries.

India’s 17 percent Muslim population were concerned and watching how the new Modi government would deal with the issue.

Subhajit Roy, speaking in a brief interview, said “One of the biggest challenges for the BJP is to build confidence in the minority religious groups that they will not be treated as second class citizens.”

Suhasini Haider played down the issue, saying “The issue is of social harmony .... a matter of democracy and humanity.”

Thus, she added that there is not an issue to worry so much for the minorities here in India and Muslim-majority Bangladesh.

Many observers feel that the prime minister has possibly taken the note of this concern as his tweet indicates “Together we will build a strong and inclusive India”.

Meanwhile, in West Bengal state there were reports of wild celebrations with BJP supporters out on the streets wearing saffron coloured dresses.

Mamata tweeted “Congratulations to the winners” hours after it was clear that she had lost polls.

“But all losers are not losers. We have to do a complete review and then we will share our views with you all.”