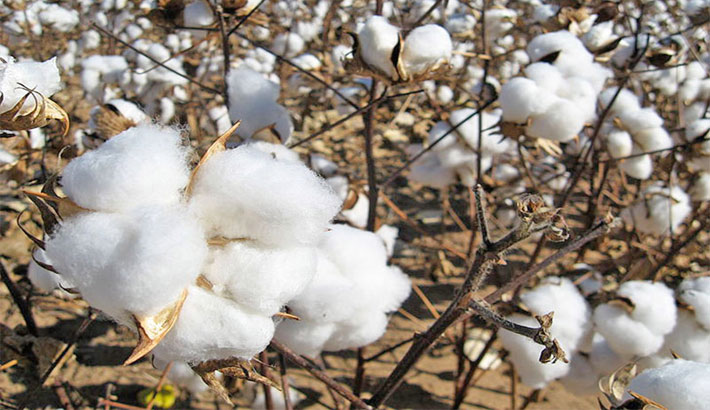 “In the just concluded season, the farmers used more lands and hybrid seeds than the previous year and the output was very good,” said an official of Bangladesh Cotton Development Board (CDB).

Although the production was increased more than three times during the period and witnessed a rising trend, the amount is still too small compared to the national demand of over 85 lakh bales, said officials of Bangladesh Textile Mills Association (BTMA). Domestic production of cotton, the main raw materials of textile industry, can hardly meet 2 percent of the country’s total demand.

According to sources, the cotton production could not reach its peak due to high production cost, low market price and low yielding capacity results in lower benefit to the farmers. But in recent years, there has been a remarkable increase in cotton production in the country due to introduction of hybrids seeds and modern technologies.

Out of the total 44,185 hectares of land brought under cotton cultivation this fiscal, some 27,000 hectares were in plane land while the rest 17,180 are in the hilly areas. Of the plane lands, some about 30 per cent were brought under hybrid cotton cultivation with the use of hybrid seeds, said officials of CDB. The farmers now feel encouraged to use hybrid seeds, especially the Chinese hybrid variety, they added. The hybrid seeds came at a time when cotton production was suffering a gradual decline because of the farmers' lack of interests. The cotton production in the 2005-06 stood at 77,000 bales from 49,770 hectares of land, but dropped to 42,380 bales from 28,707 hectares in 2007-08. But the production again rose to 50,175 bales from 32,600 hectares of land in 2008-09 and since then the production started increasing and the trend is still continuing.

According to analysts, lower income from the existing varieties discourages the farmers to grow cotton as they have other options for better gains -- maize, vegetables, banana and flower. But stakeholders now expect a boost in the farmers' confidence with the advent of the hybrid seeds.

Cotton is grown in 32 districts, mostly in Jessore, Jhenaidah, Kushtia, Chuadanga, Meherpur, Pabna, Tangail, Mymensingh, Rajshahi, Natore and Rangpur districts and in the hilly districts of Bandarban, Khagrachhari and Rangamati. Approximately sixty thousand farmers are involved in cotton production around the country; most of them have marginal and small holdings.

Hill cotton is an indigenous variety and cultivated in Jhum system and used for handloom cloths. Medium staple cotton mainly, the upland cotton, is primarily used by the textile industry and also utilized by cottage industry and individual farm family.

Cotton seeds are also used to extract edible oil in the oil industry. However, the use of cotton plant and its products include among other as fuel, as seed and fiber, as cotton seed cake, cotton seed oil, as yarn for textile, as rug and mattress etc.