DiCaprio, Pitt want to team up again after Tarantino hit 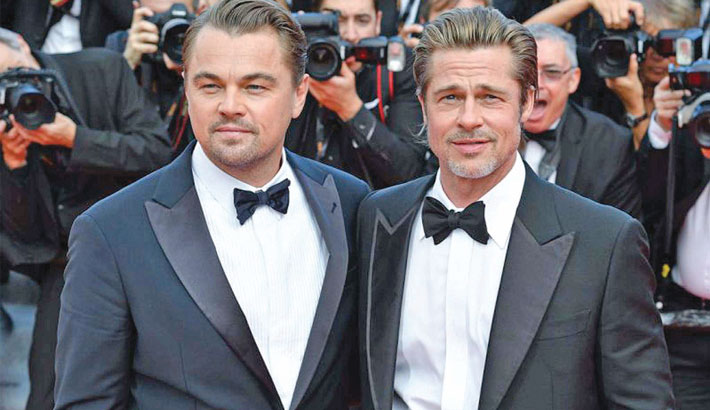 Leonardo DiCaprio and Brad Pitt said Wednesday they had to tap into distant memories of being Hollywood outsiders for their star turns in Quentin Tarantino’s new movie, calling it a “love letter” to the industry’s dreamers, reports AFP.

Speaking after their movie “Once Upon a Time... in Hollywood” was rapturously received at the Cannes film festival, the A-list actors said they bonded on set over fame’s surreal strangeness and hoped to work together again.

“There was an incredible ease and comfort getting to work alongside Brad, we kind of grew up in the same generation, got our start around the same time,” Di Caprio said.

“Quentin gave us this incredible back story for our characters... their work together, their friendship together, what they’ve been through in the industry together.

“All that fed into the incredible comfort and ease that I think he and I had with one another.”

In the dark fairytale set in the Los Angeles of 1969 just before the Manson murders, DiCaprio, 44, plays a fading television western star with Pitt, 55, his stunt double and off-screen sidekick.

DiCaprio called the movie by the director of “Pulp Fiction” and the “Kill Bill” movies a “love letter to the outsiders of the industry”.

He said his and Pitt’s high-flying careers had long run in parallel until they finally converged thanks to Tarantino. “When Quentin puts you into these improvised scenarios... it was incredibly easy working with Brad. We forged hopefully a great cinematic bond in a film about our industry,” DiCaprio said.

Pitt said remembering what it was like as young actors on Hollywood’s fringes, and later dealing with the often bizarre world of mega-celebrity led the two actors to bond. “It was really great fun, I had a great laugh with him. It’s that thing of knowing you’ve got the best of the best on the opposite side of the table holding up the scene with you. And there’s a great relief in that,” he said. “As Leo said, we have the same reference points... we’ve been going through this at the same time, have similar experiences to laugh about. I hope we get to do it again.”

Pitt said the tragic story of actress Sharon Tate murdered by Manson cult members, played by Australian Oscar nominee Margot Robbie, held an enduring fascination. “In the time building up to that, there was a free-love movement, there was a lot of hope, there were a lot of new ideas floating out there, cinema was being recalibrated,” he said.