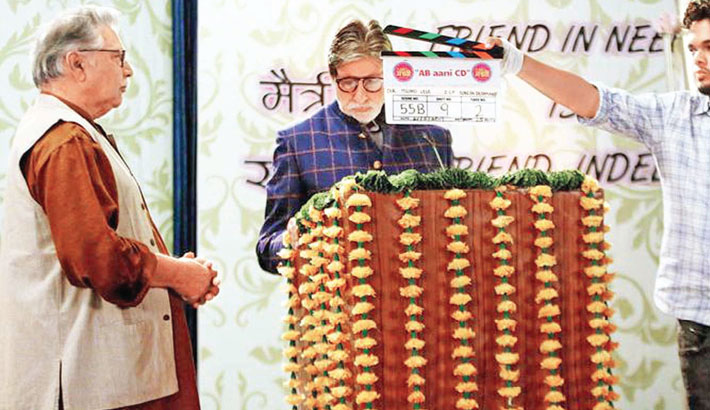 Almost 25 years after he featured in a song for the Marathi film Akka (1994) that was directed by his makeup artist Deepak Sawant, Amitabh Bachchan is set to dabble in Marathi cinema again. The megastar, who will be seen playing himself in AB Aani CD, kicked off the film's shoot at a suburban studio on Tuesday with co- star Vikram Gokhale.

While the day plan included filming a simple sequence with Big B, producer Akshay Bardapurkar says it was fascinating to see how the legend elevated it with his improvisation, reports mid-day.

"The scene required Bachchan sir to walk into the auditorium and wave out to the crowd. But he spontaneously added a few lines in Marathi, and the effect was surreal. While we thought that he would pack up in three to four hours, he gave adequate time to each scene and was on the set for almost seven hours. The Milind lele- directed comedy revolves around Gokhale's character Chandrakant Deshpande as he plans a birthday bash for his long- time friend and superstar Bachchan. Glad to have roped in two powerhouse performers.

The producer adds, " It's surprising that Bachchan sir hasn't done any Marathi film so far. Filmmakers must have assumed that he would charge a bomb, or may have been unable to come up with a script that would suit him. When he heard our script, he gave his nod immediately. It was difficult to get his dates, but we finally managed it." The next step was to rechristen the film and play on the megastar's name. " The working title was Deshpande Chi Gosht since we weren't sure if Bachchan sir would be part of the film. But the new title is quirky and catchy." even though the actor has a 15- minute part in the comedy, Bardapurkar argues that it isn't a special appearance.

"The story revolves around him, much like in Irrfan Khan's Billu [2009], where Shah Rukh Khan was present only in a part of the film but was integral to the story." ' Bachchan sir spontaneously added Marathi dialogues' ' It was difficult to get Bachchan sir's dates, but we managed it' Producer Amitabh Bachchan on the first day of shoot with co-star Vikram Gokhale.