TMC, BJP in a neck-and-neck fight in West Bengal 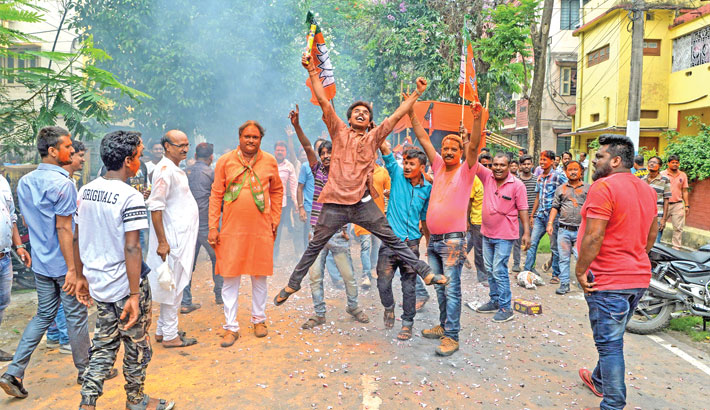 An Indian supporter of Bharatiya Janata Party (BJP) jumps in the air as he celebrates along with others on the vote results day for India’s general election in Siliguri on Thursday. Indian Prime Minister Narendra Modi looked on course for a major victory in the world’s biggest election, with early trends suggesting his Hindu nationalist party will win a bigger majority even than 2014. —AFP PHOTO

Kolkata: Mamata Banerjee’s TMC was Thursday facing massive headwinds in key battleground state of West Bengal where it is locked in a neck-and-neck fight with the BJP, with the state’s ruling party leading in 22 Lok Sabha seats and the challenger saffron outfit in 19, reports PTI.

According to latest Election Commission figures, the BJP was also the main contender in 21 of the 22 seats where the Trinamool Congress was leading.

The saffron party was giving the TMC a run for its money even in terms of vote share having polled 39.81 per cent of votes counted so far. The TMC has clinched 43.8 per cent.

The four-party Left Front, once a formidable force in the state, has garnered a measly 7.8 per cent of votes so far, and its candidates are leading in none of the state’s 42 Lok Sabha seats.

Congress’s Adhir Ranjan Chowdhury, the sitting MP from Baharampur, was leading the table in his constituency by over 80,000 votes.

Abhijit Mukherjee, the son of former President Pranab Mukherjee and sitting MP from Jangipur, was nowhere in contention.

Mamata Banerjee, who defended her terrain like a tigress since becoming the chief minister in 2011, ending the Left Front’s unbroken 34-year rule, called a press conference at her Kalighat home in the afternoon which was “cancelled” without assigning any reason.

Her strident denunciation of Prime Minister Narendra Modi’s policies, including his insistence on pressing ahead with contentious issues like the Citizenship (Amendment) Bill and the National Register of citizens, had catapulted her to the forefront of the forces arrayed against the BJP and the NDA in the election.

The BJP, which was then considered a marginal player, had secured two seats with 17.02 per cent votes, and the Congress four seats, polling 9.58 per cent votes.