Two plays to be staged at BSA today 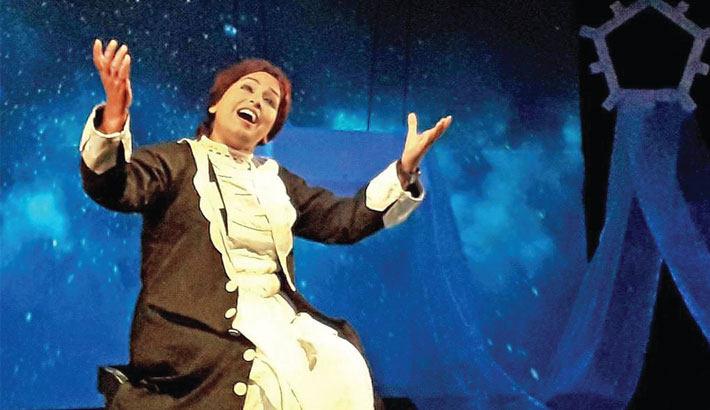 A scene from the play Helen Keller

The play Helen Keller sheds light and insight into the life of Helen Keller, a pioneer of education for the deaf and blind of all-ages.

Written by Apurba Kumar Guho, Zahid Ripon is the director of the drama.

Helen Adams Keller was an American author, political activist, and lecturer. She was the first deaf-blind person to earn a Bachelor of Arts degree.

The story of how Keller’s teacher, Anne Sullivan, broke through the isolation imposed by a near complete lack of language, allowing the girl to blossom as she learned to communicate, has become widely known through the dramatic depictions of the play and film The Miracle Worker.

A prolific author, Keller was well-traveled and outspoken in her convictions. A member of the Socialist Party of America and the Industrial Workers of the World, she campaigned for women’s suffrage, labor rights, socialism, antimilitarism, and other similar causes.

Helen proved to the world that deaf people could all learn to communicate and that they could survive in the hearing world.

She died in her sleep on June 1, 1968, at her home, Arcan Ridge, located in Easton, Connecticut, a few weeks short of her eighty-eighth birthday.

On the other hand, the play, Shikhandi Kotha, written by Anan Zaman and directed by Rashid Harun, has already earned much acclaim at home and abroad as a powerful stage-play on the lives and woes of the transgender community in Bangladesh.

Shikhandi Kotha sheds light on a group of Hijra (literally known as transgender community but they want their identity as third gender, neither man nor woman) and their common joys, woes and frustrations of everyday lives.

Shikhandi Kotha narrates the story of a transgender individual, who takes birth into a family as Ratan in a village named Hijaltali.

When the boy reaches his adolescence, Ratan discovers a different gender in him and becomes Hijra with a feminine gender identity.

As Ratan’s gender problem reveals, the family refuses to accept him.