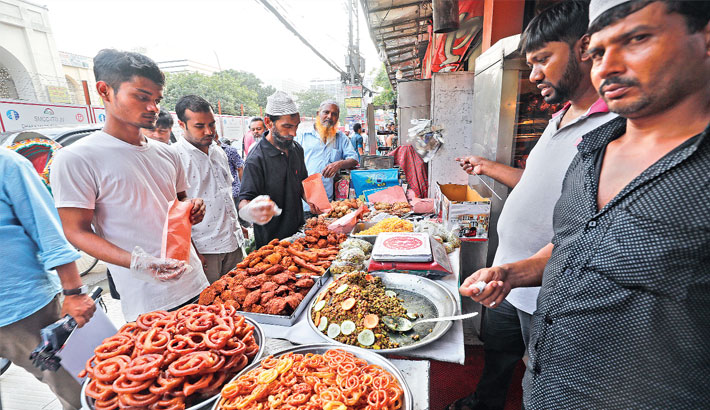 Iftar items are selling in an unhygienic condition at a roadside hotel in the capital’s Baitul Mukarram National Mosque area on Wednesday. Consumption of such food items poses health risk. – SUN PHOTO

Substandard iftar items are being sold hugely in different restaurants, eateries and footpaths in the city, posing a serious health hazard to the consumers during this holy month of Ramadan.

They also make those foods in unhygienic conditions and sell those to the fasting Muslims in the country.

Due to consumption of such foods, people usually suffer from different diseases such as stomach upset, diarrhoea, cholera, typhoid, hepatitis, cancer, kidney failure and liver damages, a health expert said.

People buy these foods every day during iftar time for its good taste and low price.

The seller can easily sell those foods hugely at eateries, footpaths, restaurants and markets as the traditional food items are popular among Muslims in the country.

Moreover, consumers are also ignorant about the danger of the substandard foods.

While visiting different restaurants, hotels and streets in the city, this correspondent found that repeatedly burnt substandard loose soybean is being used to prepare those foods.

They are also using inferior-quality powders of turmeric, chilli, cumin and chickpea. Textile colours and different chemicals are also being used in the foods.

The foods are being prepared in unhygienic conditions; the cooking places are dirty and shabby; sweating workers are preparing the foods without using hand gloves.

The microorganisms also contaminate the foods through air, dust, flies, and dirty hands.

Traditional iftar item like piyaju, beguni, halim, potato-chop, pakora and jilapi are being fried in same oil from dawn to dusk. The burnt oil is again used in the following days.

“Use of over burnt oil to fry different foods creates Trans Fatty Acid (TFA). Consuming such foods can cause cancer in human body,” the professor said.

Textile colours and artificial sugar, which are being used in the foods, are highly toxic to human health, he said.

Consumption of textile colour may damage kidney and liver. Rotten foods can cause stomach upset, diarrhoea and other gastroenterological diseases, the physician said.

He suggested people to eat homemade food and avoid fried food in iftar.

Recently a mobile court conducted drive in the capital’s Dhanshiri Resturant at Gulshan-2 on May 13 and fined Tk2 lakh for storing adulterated, rotten and substandard foods.

They stored rotten ducks, chickens, fishes and other foods in fridge for a long time.

During the drive the law enforcers found some cooked duck fully covered with fungus. They also found two rotten coral fishes there.

Kitchen of the restaurant was found unhygienic and the workers were working without maintaining hygiene and wearing hand gloves.