Space: The Core Of Cosmic Harmony 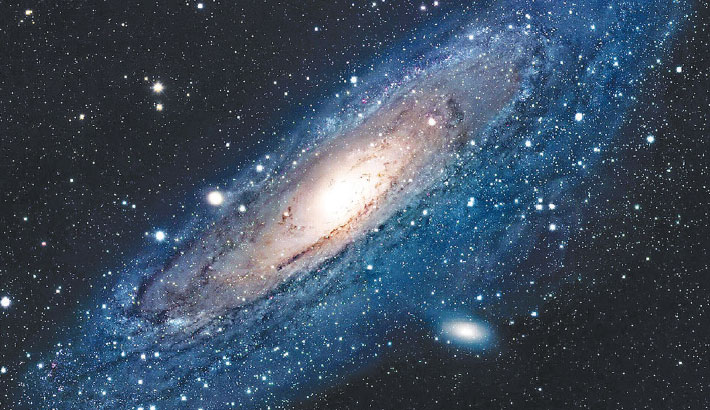 The sense of sight waves towards the horizon of a universal harmony. The harmony within and beyond the horizon sustains the ocean of infinite cosmos. The cosmos is the inborn infinity to design a premise of synergic silence which is the mysterious manifestation of the time of our universe. The premise is the space where the universe is harmonized by the congruence of cosmic essence. The congruence contains the impact that invigorates the imagination of hope for the human life.

Space is flexible. It’s been expanding at a measurable rate since the beginning of time. The Big Bang theory rests on an idea called inflation theory, which holds that at a fraction of a moment after the dawn of creation, the universe underwent a sudden dramatic expansion. It inflated, or ran away with itself, doubling in size every 10-34 seconds. Some astronomers speculate that the singularity that became the Big Bang was the relic of an earlier collapsed universe, and that our universe is just one of an eternal cycle of expanding and collapsing universes through the endless space.

The first human to step into space was Soviet cosmonaut Yuri Gagarin, who orbited Earth in Vostok 1 in 1961. The following year, American astronaut John Glenn, Jr., became the first American to orbit Earth. American Neil Armstrong was the first human being to set foot on the moon in 1969. The first space observatory may have been Stonehenge. Around 2600 B.C., Britons constructed stones that marked critical positions of the sun and moon throughout the year. The term “space” was used as early as Milton’s Paradise Lost in 1697 to describe the region beyond Earth’s sky.

While scientists can describe and predict gravity, its source within matter is still unknown. Without gravity in space, body fluids rise higher in the body than they do on Earth, which means there’s more fluid than usual in the skull pressing on the eyes. This squashes the eyeballs of the astronauts and blurs their vision. Because there is no gravity in space, there is no buoyant force, which means nothing pushes bubbles up and out of drinks in space. When water boils on Earth, it creates thousands of little bubbles. However, in space, boiling water produces one giant, undulating bubble. Scientists believe this is due to lack of convection and buoyancy that accompanies gravity.

Moreover, humans can survive 15–30 seconds in outer space as long as they breathe out before the exposure. Breathing out prevents the lungs from bursting and sending air into the bloodstream. After roughly 15 seconds, a person will become unconscious due to lack of oxygen, which leads to death by asphyxiation. On Earth, a flame will rise. In space, however, a flame will move outward from its source in all directions. Because space has no gravity, the expanding hot air experiences equal resistance in all directions, so it moves spherically from its source.

A space station, also known as an orbital station or an orbital space station, is a spacecraft capable of supporting crewmembers, which is designed to remain in space, most commonly as an artificial satellite in low Earth orbit, for an extended period of time and for other spacecraft to dock. The International Space Station (ISS) serves as a microgravity and space environment research laboratory in which crew members conduct experiments in physics, chemistry, biology, astronomy, meteorology, branches of engineering, and other fields. The station is suited for the testing of spacecraft systems.  The ISS maintains an orbit with an altitude of between 330 and 435 km by means of reboost manoeuvres using the engines of the Zvezda module or visiting spacecraft. It circles the Earth in roughly 92 minutes and completes 15.5 orbits per day.

Cosmic rays in space are highly energetic particles that flow throughout our solar system from deep in outer space, but astronomers are unaware of their origins. The deep mystery of the space stimulates the sense of human being to know the manifestations of the universe. Universe designs everything from the smallest particle on this Earth to the infinite galaxies of endless space. The divine design originates the quest and quintessence for stepping into the space to know the unknown, to see the unseen, and to explore the mystery. The explorations escalate the earth to an enviable eternity with our passionate penetration deep into the space, sky, stars, and earth. Each of the steps in the labyrinth of space with infinite impulse of curiosity catalyzes the conquest as a giant leap for mankind.

(The writer is a chemical engineer.)