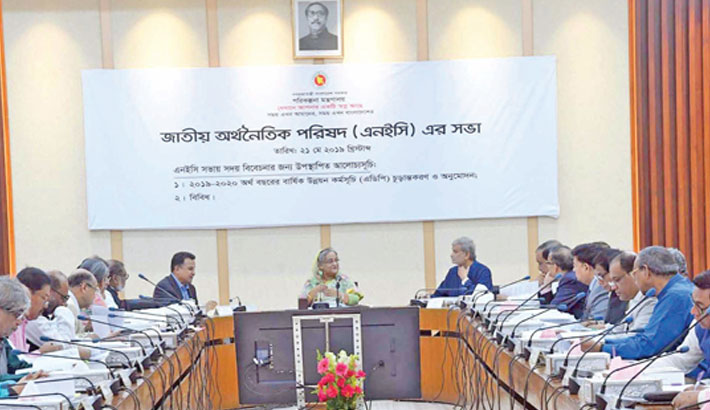 Prime Minister Sheikh Hasina presides over a meeting of the National Economic Council (NEC) at NEC conference room at Sher-e-Bangla Nagar in the capital on Tuesday.

A draft of the same ADP outlay got preliminary nod from an extended meeting of the planning commission on 08 May, which was prepared according to the finance ministry’s ceiling.

“Prime Minister Sheikh Hasina has approved the ADP. It is a record as ADP size for the first time crossed two billion mark, which is a landmark for the country,” commented Planning Minister MA Mannan at a post-meeting press briefing.

The overall size of ADP stands at Tk2,15,113.73 crore after inclusion of Tk12,392.73 crore development budget of public corporations that also got approval from the NEC meeting.

Mannan said out of the ADP money, Tk1,30,921 crore has been estimated to come from the government’s own resources and Tk71,800 crore from development partners.

The new ADP for FY’20 has some 1,475 projects including 1,358 investment projects, 116 technical assistance projects and one project from the Japan Debt Cancellation Fund (JFCF). Besides, there are some 89 projects which would be implemented by the autonomous bodies and corporations.

The number of unallocated and unapproved project is 1,046 while 242 projects have been placed in ADP book with a hope to collect foreign funds, with 272 projects expiring on 30 June this year that have also been included.

A target has been set to complete a total of 355 projects in FY’20. ADP book incorporated 62 public-private partnership (PPP) projects.

Some 58 projects that had been expected to be complete by this fiscal but won’t reenter the next fiscal’s ADP.

Mannan said Prime Minister Sheikh Hasina in the meeting asked the authorities concerned to give due importance on research and technical education and complete the projects within the stipulated timeframe.

She also asked for finding out the reasons for those projects which could not be completed within the stipulated timeframe and facilitate their implementations.

In case of land acquisition, she suggested being cautious so arable land and khas land are not acquired.

The planning minister said the premier has directed him to take initiative to make a publication on the overall development expenditure in the CHT region by all the ministries and divisions.

She also directed all the authorities concerned to clear their arrears as well as pay timely the land development taxes.

Besides, the Local Government Division enjoyed the highest allocation as a single ministry with Tk29,777 crore.

When asked about the alleged irregularities in some components of the Rooppur Nuclear Power Plant Project, the planning minister said he would direct the IMED to make a field-visit to the project site and give a feedback.

Mannan told another questioner that no project would suffer due to fund shortage.

He also asserted that the government would give much more emphasis than it did in the past to implement the new ADP from the very first day of the next fiscal year.