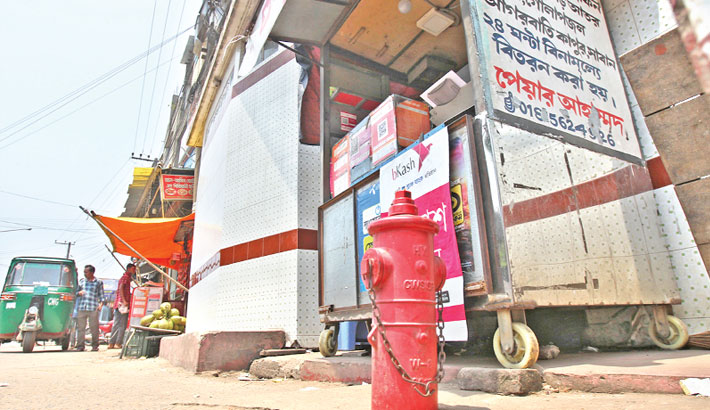 A fire hydrant installed earlier is seen in the city’s Baro Quarter area. Cwasa will install 200 more such hydrants to facilitate fire fighting in the city. – PHOTO: RABIN CHOWDHURY

Installation of the 200 more hydrants will increase the number of total hydrants in the port city to 230, said sources in the Cwasa engineering department.

Earlier, the Cwasa set up the 30 hydrants at different important points including Pahartali, Agrabad, Choumuhuni and Patenga in the city under a project titled ‘Chattogram Water Supply Improvement and Sanitation Project’ financed by World Bank (WB).

The Cwasa sent a letter to the Fire Service and Civil Defence (FSCD) department asking them to suggest the important spots where hydrants can be installed to address the scarcity of water during fire fighting in the city on September 11, 2014.

In response to the letter, the FSCD formed a committee and sent a list of 86 spots under 41 wards of Chattogram City Corporation (CCC) to set up the hydrants.

According to statistics of the FSCD, some 97 per cent establishments lack sufficient fire safety gears in the port city.

FSCD officials said losses of human lives and properties in fire incidents turn into a common phenomenon every year.

Fire fighters have to face difficulties to extinguish fire due to lack of source of water as there is no sufficient water-body in the city.

Besides, narrow roads and lanes also hamper fire fighting and rescue operation during the fire incidents.

Contacted, Project Director (PD) Engineer Maksud Alam of the KWSP, Phase-2 told the daily sun that the 200 fire hydrants will be put into operation by 2023 after completion of the project.

“Though the FSCD suggested us for setting up 86 hydrants, we decided to install 200,” he said.

The engineer hoped that fire fighting at any establishment will be easier when sufficient water will be available through the hydrants.

Spread of fire also can be stopped following installation of the hydrants at important spots,” said Maskud, also superintending engineer of the Cwasa.

To get smooth water supply from the hydrants, required water pressure will be provided to each of them which will remain connected with the central reservoir of the Cwasa located in Nasirabad area in the city, said the engineer.

“We will be able to control and monitor the hydrants through Supervisory Control & Data Acquisition (SCDA) method from the control room at Nasirabad during any emergency period,” said Maksud adding that Cwasa will complete installation of the hydrants by early 2021.

Most of the high-rises in densely populated areas lack fire safety measures making them vulnerable to fire accidents, he said.

Jasim said though some 50 per cent chemical shops and warehouses are located at Bundle Road and Asadganj, the areas lack required space for fire fighting and source of water.

He informed that they along with magistrates of Chattogram district administration conducted drives in the areas earlier to make people aware of the fire safety measures.

“We held meetings with different stakeholders including owners of high-rises to ensure sufficient safety measures following the devastating fire at FR Tower in the capital’s Banani area that claimed at least 26 lives and injured 70 others in March this year,” he said.

Though most of the owners of high-rises are indifferent to the call, some came forward with positive attitude, said the AD.

However, the hydrants will play imperative role in extinguishing fire in the densely populated areas, he observed.