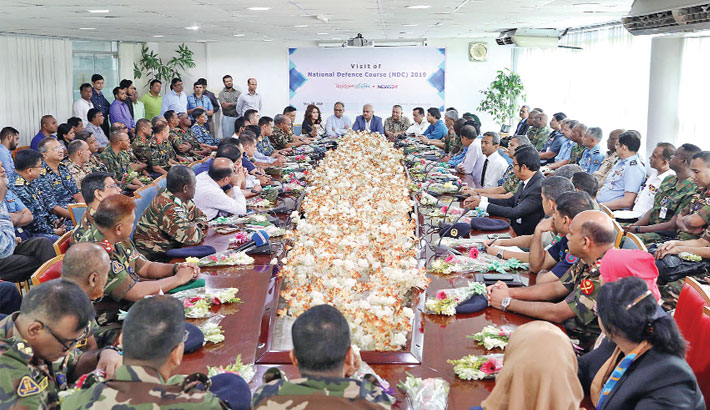 A delegation of National Defence College (NDC) exchange views with editors and senior journalists of the newspapers, television and radio of East West Media Group Limited (EWMGL) at its conference room in the capital’s Bashundhara Residential Area on Monday. —SUN photo

The team members included faculty members and participants of NDC Course 2019. Apart from civil and military officials of Bangladesh, members of armed forces of 15 countries are taking part in the course.

Held at the EWMGL conference room, the team members exchanged views with the editors and senior journalists of newspapers, TV and radio of EWMGL, a concern of the country’s leading business conglomerate Bashundhara Group.

They opined that the role of media is very crucial for country’s branding abroad to attract foreign investment and explore the benefits.

Replying to a query, the editors said that print and electronic media in Bangladesh have a consensus in protecting national security, curbing militancy, addressing Rohingya issue and highlighting the economic projects.

The editors categorically said that they are free to discharge their professional duties without interference of management or anybody else.

Journalists said that they had worked with the armed forces during natural calamities and other disasters. They also said that they are ready to enhance the cooperation.

During the visit, Maj Gen Md Moshfequr Rahman handed over crests to the editors while Naem Nizam gave floral bouquet and crest to him.