Economic dev to be attended freeing country of militancy: PM 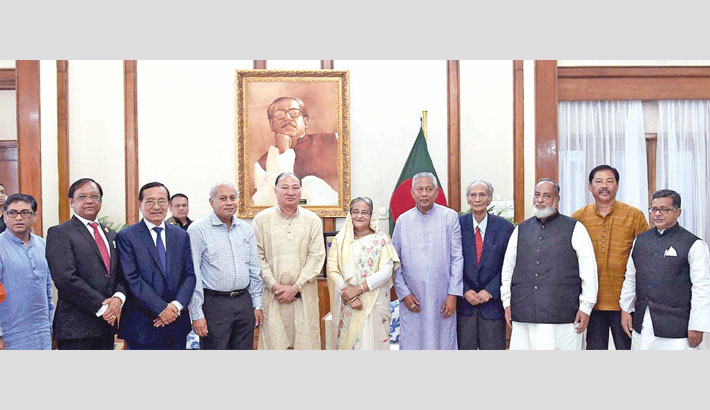 Leaders of the Buddhist community pose for a photo with Prime Minister Sheikh Hasina at a reception accorded to them at her official Ganobhaban residence in the capital on Monday on the occasion of Buddha Purnima. – pid photo

“It’s very much regretful that terrorism and militancy have now become a global problem. Actually, those who’re involved in militancy are just militants, they’ve no religion, country and border....They’re just militants... this is the fact. We want to keep Bangladesh free from these [menaces] and free it from poverty.” she said.

The Prime Minister said this while speaking at a programme when leaders of the Buddhist community greeted her on the occasion of Buddha Purnima at her official residence Ganobhaban.

The Prime Minister said the government wants the development of all irrespective of religions and castes. “That’s our duty and that’s our political ideology.”

The government believes in communal harmony, she said adding, “In Bangladesh, people celebrate together the festival of any religion,” she said.

Hasina said the responsibility of the state is to make sure that the people of all religions could perform their religious rituals peacefully and independently. “That’s secularism and non-communalism.”

She also said, “The Creator will decide what is good or bad, and what is right or wrong. The Almighty didn’t give that responsibility to human being.”

The Prime Minister said the government will ensure so that the people of Bangladesh can perform their religious rituals with dignity and sincerity. “This tolerance and brotherhood will prevail, and that’s our aim, we’re working to that end.”

She also urged all irrespective of their religious identities not to feel neglected.