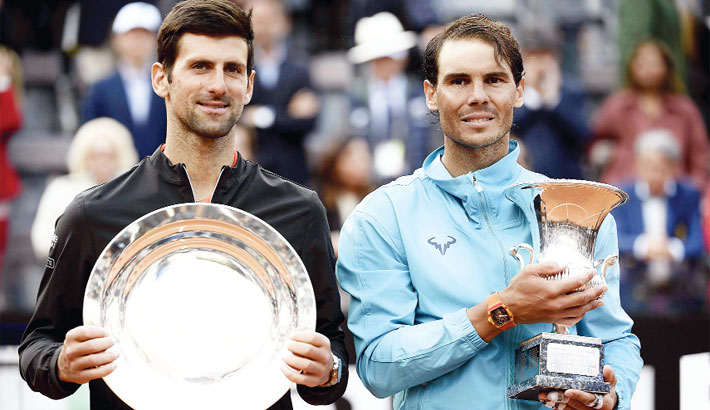 Rafael Nadal defeated his greatest rival Novak Djokovic 6-0, 4-6, 6-1 to win a ninth Italian Open title and a record 34rd Masters on Sunday, leaving his vanquished foe to label the Spaniard as “the number one favourite for Roland Garros”.

World number one Djokovic, winner at the Madrid Open last week, produced an error-strewn performance in his 54th meeting with second-ranked Nadal, who claimed the 81st title of his career.

“Finally I have a title,” said Nadal after securing his first title of 2019.

“I’m happy to reach that level in the last tournament before a Grand Slam.”

Djokovic had beaten Nadal in the final of the Australian Open this year for his third straight Grand Slam win after Wimbledon and the US Open.

Nadal overtakes Djokovic at the top of the list for Masters wins — the pair were level at 33 each before Sunday’s final — in a timely boost ahead of his assault on a 12th French Open crown in a week’s time.

“I’m really glad that I managed to get into the third set, considering the first set where I was blown away from the court,” said Djokovic.

After three semi-final defeats in Monte Carlo, Barcelona and Madrid, Nadal has returned to his best form ahead of Roland Garros.

“Nadal, number one favourite, without a doubt, then everyone else,” said Djokovic of his predictions for Roland Garros.

The Spaniard dominated early with Djokovic losing a set 6-0 for the first time to a player he describes as his “greatest rival”.

But Nadal missed four break chances in the second set, dropping his first set this week after losing serve at 4-5, to throw the Serb a lifeline.

The fightback was brief as the 31-year-old Djokovic dropped serve immediately in the third set, smashing his racquet in frustration.

Nadal never looked back sealing a third win over Djokovic in their five Rome finals, although the latter still holds a 28-26 career edge.