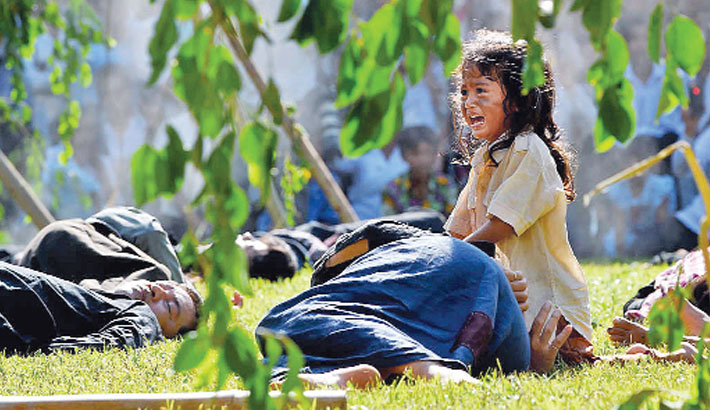 PHNOM PENH: Black-clad students reenacted the horrors of the Cambodian genocide at the “Killing Fields” on Monday to commemorate the two million people killed by the Khmer Rouge’s murderous, Maoist regime.

Hundreds gathered at the notorious site in Phnom Penh to mark the annual Day of Remembrance with prayers and performances, including students wielding wooden rifles, knives and bamboo sticks in mock attacks.

“We performed these scenes in order to remember the genocidal Pol Pot regime and the cruelty that Cambodian people suffered,” Chhaem Khleuong, a fine art teacher who played a Khmer Rouge cadre, told AFP.

A quarter of Cambodia’s population died under Pol Pot’s Khmer Rouge regime, culled in mass killings or of starvation, forced labour or torture.

His brutal reign came to an end in 1979, and the Khmer Rouge atrocities are still remembered at museums and sites dedicated to victims of the genocide.

The Day of Remembrance, more commonly called the “Day of Anger” in Cambodia, is held at the Choeung Ek “Killing Fields”, where some 15,000 people were confined and sent to their deaths between 1975 and 1979.

It was an emotional day for many attendees, some who cried as students pretended to slit victims’ throats, shoot them dead or subject them to waterboarding.