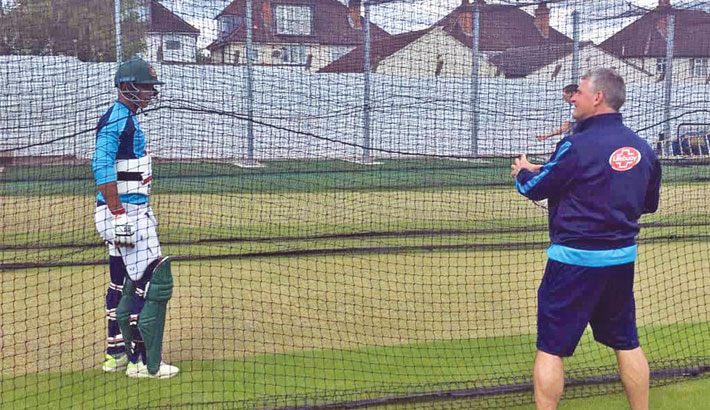 Bangladesh head coach Steve Rhodes is seen during a net session at Dublin in Ireland on Monday. Bangladesh will begin their campaign against the Proteas on June 2 at the Kennington Oval in London at 3:30pm (BST).

Bangladesh head coach Steve Rhodes insisted that clinching their maiden multi-nation tournament in Ireland indicates the depth of their strength as they achieved the feat on the back players who are not part of the fabulous five.

Bangladesh have became a force to reckon in the ODI format for quite some time and that is considered largely due to the contribution of the five seniors- Mashrafe Mortaza, Shakib Al Hasan, Tamim Iqbal, Mushfiqur Rahim and Mahmudullah Riyad.

They are considered to be the backbone of their strength and it is expected to unless they put up a unified performance it is unlikely that Bangladesh will reach far in the upcoming World Cup.

However, their maiden multi-nation ODI championship in Ireland was earned by the cricketers who are considered to be the generation-next.

Soumya Sarkar, who remained consistent all through the tournament, at the top gave them a perfect start with a timely half-century while Mosaddek Hossain completed the formalities with a scintillating fifty to help them beat West Indies by five wickets in the final and win a trophy after failing to do so in six previous occasions during the last 10 years.

Rhodes feels that winning the trophy despite the absence of Shakib, who was rested due to side-strain and through the performance of the young crops of national players proves that they are not a five-man army.

“This was quite an amazing chase on Friday because it was tough and there have been two or three guys who have played special innings,” said Rhodes.

“What it does today, if you think of Mosaddek for example, he is a guy now who is going to keep everybody on his toes. That’s the depth of the squad and he might not play and if he doesn’t then what a great position we have some other good players playing, what it does give that it gives us the confidence that we can win some big games as well,” he said.

“That means Bangladesh are stronger within the squad and that’s what we want as we want more depth and if we get that depth then people to stop talking about the big five,” he said.

“We are not including the guy (Jayed) who have got five wickets and its obviously hard for him and that means the guys who are in that squad are excellent players. And he takes that sort of thing on his chin like most of the squad do. They realise we are a squad not just the team or eleven or individual. They understand that sometimes they have to make way because there are some other good players playing,” he said.

“Shakib didn’t play and he had a fantastic tournament. Great knock with the bat, ball and in the field. So, win without him having been in good knick is a big effort,” he said.

Rhodes added that they need to show more patience with cricketers like Soumya as he feels that in Bangladesh people get impatient in quick time that he feels only hamper the growth of the players.

Soumya’s form ahead of the tri-nation series was a major concern but he returned to his former self by hitting a century and a double hundred in the domestic list-A tournament and looked to be carrying the form in Dublin as well as scoring three successive half-centuries.

“First of all with Soumya he has been a revolution since he hit that hundred and double hundred in the DPL but he also gets some rough days from people because he is a type of guy when he is in-form he is really hot,” said Rhodes.

“So, it’s just nice to see him carrying on that form and I hope people would get off his back a little bit because he is a wonderful player. We support him and back him. But not everyone always does that,” he added.

Rhodes added that they have decided not to make huge changes in the batting order and keeping that in mind they did not want too many shuffles after learning that Shakib was out of the final.

“I think we have done some really good stuff but the batting has been really good,” he said.

“And it be consistent and you have seen in our batting order that didn’t have Shakib. So we decided to change one position instead of changing several positions because we want the consistency with people knowing where they are batting and the likes of Mushfiq was in four, Mithun in five and Mahmudullah in six,” he said.

“That gives us some consistency knowing that they are gonna be successful in that type of role because that’s the role that we have given them and they understand how to do them too,” he concluded.