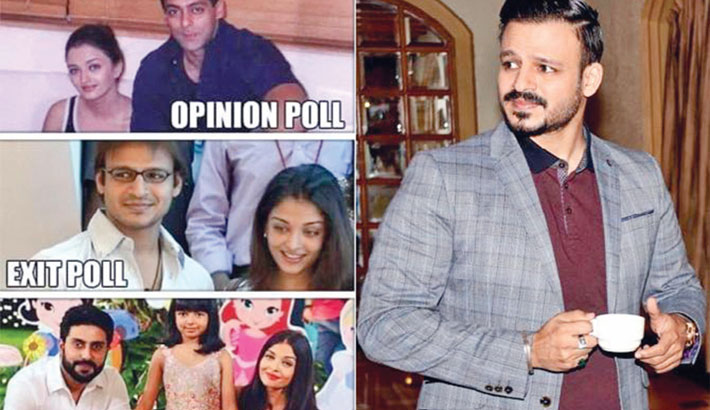 Vivek Oberoi was massively slammed after he tweeted a meme, which mocked Aishwarya Rai Bachchan. The actor, who is all geared up for his upcoming film ‘PM Narendra Modi’, a biopic on Prime Minister Narendra Modi in which he plays the lead role, took to his Twitter handle to share the viral meme and wrote, “Haha! creative! No politics here....just life (sic)”,reports Mid-day.

Hawk-eyed Twitter users and celebs did not spare the actor for his “joke”. Ace badminton player Jwala Gutta commented: Extremely absurd of you to tweet this!! Disappointing!

Sonam Kapoor Ahuja, too, was quick to comment on Vivek Oberoi’s tweet. She said, “Disgusting and classless.”

Politician Jitendra Awhad too commented. He wrote: “How cheap a person can b ... @vivekoberoi thinks after his film on #Modi he is reincarnation of #Modi. Look at the level of disrespect for women. @SalmanKhanHolic don’t u think he has crossed limits? @SrBachchan it’s disrespect to any women (sic)”

On Sunday, Farhan Akhtar was trolled for his tweet asking people not to vote for Sadhvi Pragya, after elections in Bhopal were over. Farhan posted a tweet, where he not only urged them to vote but also made an appeal to voters of Bhopal to vote against BJP’s Pragya Thakur, unaware of the fact that the parliamentary constituency had already voted in the sixth phase of polls on May 12 last Sunday. “Dear electorate of Bhopal, it’s time for you to save your city from another full-of-gas tragedy. #SayNoToPragya #SayNoToGodse #RememberTheMahatma #ChooseLoveNotHate,” the actor tweeted.

Later, Farhan hit the trollers with a comeback saying: Humne taareek galat samjhi toh galaa pakad liya, Jisne itihaas galat samjha use galey laga rahe ho” (I got the date wrong and was held by the neck, but those who got history wrong are being embraced by all of you).” We wonder what Vivek Oberoi’s comeback would be!