Neelakhyan to be staged at BSA May 23 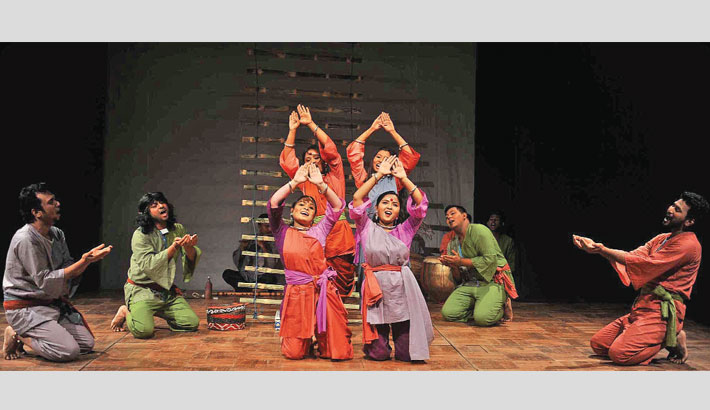 Popular theatre troupe Mahakal Natya Sampraday will stage its much acclaimed   production Neelakhyan at Bangladesh Shilpakala Academy on May 23.

The 50th stage show of the play will held at the experiment theatre hall of BSA at 07:30pm on the day.

Neelakhyan, an eternal depiction of love and romance, was dramatised by Anan Zaman based on Sapure of Kazi Nazrul Islam.

The plot presents the story of a snake-charmer who suffers between desires for physical love and spiritual attainment.

The storyline of the play revolves around Zohor, leader of a snake charmer’s community, who eagerly appeales to Monosha, the goddess of snakes and the underworld, to grant him a spiritual status that will make him impervious to snake venom. The goddess accepts his prayer on the condition that he will have to abstain from carnal desires to dedicate his body and mind to achieving the goal.

He will also have to suffer 100 bites from snakes on consecutive nights surrounding the full moon. A determined Zohor sets out on his journey to achieving the target and declares total sexual abstinence, which results in a suicide of his beloved Binti, who feels neglected.

The fatal blow comes when Zohor, nearing the end of his ‘sadhona’ (continuous spiritual effort to achieve something), falls for a girl and thus fails to attain his desired status.