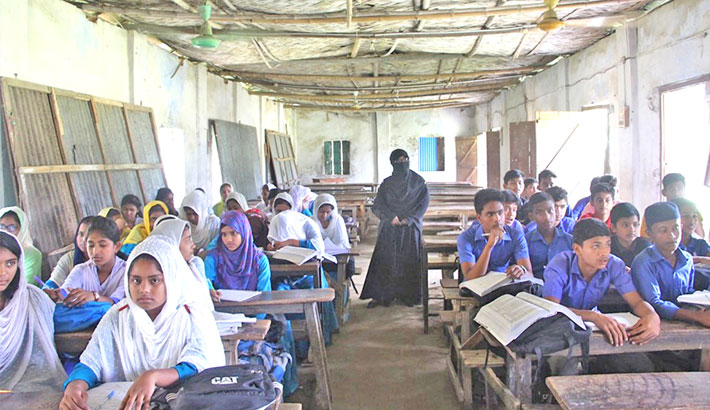 More than 700 children, who are studying at Chandipur Monosha High School in Ramganj upazila of Lakshmipur district, attend their class everyday in a dilapidated school building. — Rahamot Ullah

RAMGANJ: Students and teachers of Chandipur Monosha High School in Ramganj upazila of Lakshmipur district have to stay amid risk for last three years as classes are held at an awfully dilapidated building.

Chandipur Monosha High School under Chandipur union of Ramganj was established by locals in 1995. The school was initially started in a semi-pucca tin-shed house. The Local Government Engineering Department (LGED) later constructed a 4-storied building.

But the school building soon rapidly started suffering damage because of the use of substandard construction materials and the lack of proper supervision by the authorities. Pieces of plaster from the roof and walls started falling and the beams got bent within a few years. Rainwater soaks into it during the monsoon. Both students and teachers suffer from the leakage of rainwater. The entire school building was declared unfit more than two years back.

But the school authorities, who have no other alternative, have been continuing academic activities in the dilapidated building with more than 700 students. Locals said there is no alternative to the school in the area. Ramganj upazila primary education officer, Mizanur Rahman Bhuiyan, said the department will take action to continue the education of the children under alternative arrangements if the school building was unfit.

Students say, in constant fear of what might happen, they have difficulty concentrating in class.

Parent of a class VIII student of the high school, Md Masum, said: “I cannot stay at home after sending my boy to school, in fear of what might occur at any moment.

A class V student of the school, said: “We are always afraid when we are doing classes. Even last year, a few students were injured after a roof collapsed in the middle of a classroom.”

During a recent visit, the correspondent found that several cracks have developed in the walls and the roof covering four classrooms of the schoolhouse, chunks of plaster have fallen off at places and the exposed rods have rusted.