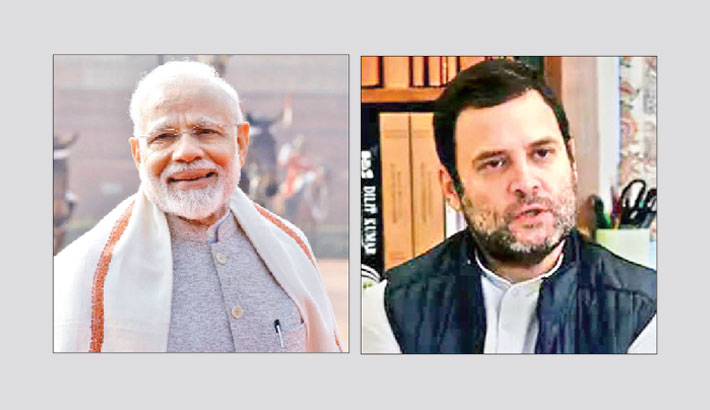 The NDA will win 300 of the 542 seats for which voting was held in seven phases ending on Sunday, an exit poll by Times Now-VMR has predicted. A survey by Republic TV-C Voter projects the BJP-led alliance to win 287 seats and a third by Republic - Jan Ki Baat predicted 305 seats. A fourth exit poll by News Nation predicted 282-290 seats for the ruling alliance.

A party or alliance needs 272 seats to win a majority. In 2014, the NDA had won 336 Lok Sabha seats, with the BJP alone winning 282 seats in a sweep credited to Narendra Modi wave.

The Congress led by Rahul Gandhi would improve its performance over the all-time low tally of just 44 seats in 2014 but the coalition led by the key opposition party, according to most exit polls, is nowhere close to stopping PM Modi’s poll juggernaut. The four exit polls pegged the Congress-led UPA’s seats at between 118 and 128.

PM Modi had made national security and fighting terror one of his key campaign points to blunt opposition attacks on his handling of the economy, attempted to paint the Congress as corrupt and run down the effort by opposition parties to consolidate votes against the ruling NDA calling them power hungry.

Sunday evening’s exit polls projections were released after voting for the marathon 7-phase national elections ended at 6.30 pm. An election exit poll, not always known to be correct, is a poll of voters taken immediately after they exit the polling stations. The survey was conducted after each round of voting starting from the first on 11 April. The Election Commission, however, did not allow the exit poll outcome to be released till the last vote was cast in the seventh phase.

At the end of campaigning for the last phase of polling, Prime Minister Narendra Modi and his party’s master strategist Amit Shah had declared that the BJP would win a clear majority on its own with 300-plus seats. The Congress had, off and on made a similar claim of a majority but as the elections came close to the finishing line, Rahul Gandhi spoke about a majority for the “secular formation”.

The next day, Andhra Chief Minister Chandrababu Naidu took a plane to Delhi and Lucknow to meet opposition leaders starting from Rahul Gandhi and NCP’s Sharad Pawar in the national capital and Mayawati-Akhilesh Yadav team in Uttar Pradesh. He was back in the national capital on Sunday, this time to meet UPA chairperson Sonia Gandhi, Rahul Gandhi as well as Sharad Pawar.

There have been unconfirmed reports that a meeting between BSP chief Mayawati and Sonia Gandhi might be on the cards over the next few days. Whether this meeting indeed takes place would depend on their assessment of the performance of non-NDA parties in the election.

In Uttar Pradesh, Mayawati and Akhilesh Yadav have experimented with stitching up an alliance to combine their votes to match up to the BJP, which had secured 42.6 per cent votes in Uttar Pradesh’s 2014 elections to win 73 out of the 80 seats. The Bahujan Samaj Party (BSP) and the Samajwadi Party (SP) had a combined vote share of 42.1% in 2014.

The Congress, however, was left out of UP’s grand alliance. Before campaigning for the seventh phase ended, Rahul Gandhi had asserted that he did not expect the BSP-SP alliance or other leaders such as Bengal chief minister Mamata Banerjee to support the NDA.