Fairytale farewell for Robben and Ribery as Bayern win Bundesliga 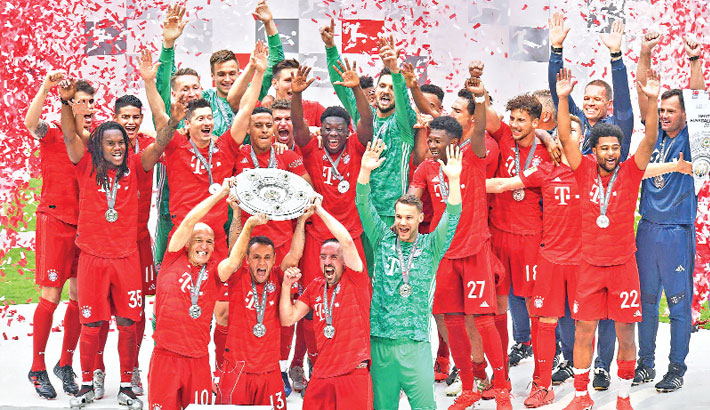 Departing veterans Franck Ribery and Arjen Robben both scored in their final game at the Allianz Arena on Saturday as Bayern Munich beat Eintracht Frankfurt 5-1 to wrap up a seventh successive Bundesliga title.

Nine points behind Dortmund in December, Bayern lost just one game between January and May as they bounced back to be crowned German champions for the 29th time in their history.

Robben and Ribery, who will both leave the club at the end of the season, came off the bench against Frankfurt to score Bayern’s fourth and fifth goals and end Dortmund’s hopes of pulling off a final day miracle.

Their departure marks the end of a glistening decade of success for Bayern, who are now set for a major squad overhaul ahead of next season, having already signed World Cup winners Benjamin Pavard and Lucas Hernandez.

There was brief hope for Dortmund as both they and Frankfurt scored either side of half-time.

After Gladbach dominated the first half, Jadon Sancho smashed in the opener for Dortmund, and Reus doubled the lead after the break.

In Munich, Sebastien Haller bundled in a shock equaliser at a corner just after the break, but Bayern responded furiously, and David Alaba restored the lead in a matter of minutes.

Dortmund’s hopes lay in tatters when Renato Sanches blasted the ball in from close range to score his first Bundesliga goal and put Bayern 3-1 up.

Ribery and Robben each came off the bench to standing ovations in the second half, and Ribery danced through the Frankfurt ranks to seal the title on 72 minutes, before Robben completed a fairytale afternoon with an 85th minute tap-in.

The defeats for Gladbach and Frankfurt saw Bayer Leverkusen sneak into the fourth Champions League spot behind RB Leipzig, as they won 5-1 away to Hertha Berlin.