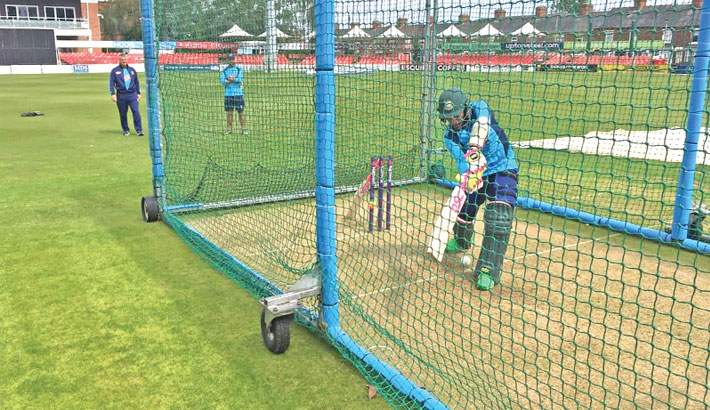 Bangladesh batsman Mushfiqur Rahim bats during a net session at Dublin in Ireland on Sunday before leaving for their ICC World Cup 2019 campaign.

Bangladesh batsmen need to score big individual scores in the upcoming ICC World Cup 2019 as that will be essential to do well in the global tournament, said BCB High Performance (HP) Unit Head Coach Simon Helmut on Sunday.

Just before the start of their much-awaited ICC Cricket World Cup 2019 campaign, Bangladesh have given themselves a huge confidence booster by clinching their maiden multi-team ODI tournament.

Bangladesh hardly allowed their opponents any room to maneuver as Tigers were pretty impressive with their all-round show, which comes as a massive plus point for this team before crossing the Irish sea to feature at the pinnacle cricketing event–the Cricket World Cup.

Coming into this tri-series, which was nothing but a preparatory event for Bangladesh before their upcoming challenge in the United Kingdom, there were some concerns, starting from the lack of experience in the bowling department to finding a settled opening partner of Tamim Iqbal.

On every occasion of this tri-series, Bangladesh were chasing and in the league stage they successfully overhauled targets of 262, 248 and 293 runs without any fuss whatsoever – by eight, five and six wickets respectively. Even, in the tournament decider, the revised target for Bangladesh was 210 in 24 overs and the Tigers won the game by five wickets with seven balls to spare.

Despite even a single batsman scoring a century in the tournament, there were six half-centuries from the winners. It shows the consistency and depth of this batting line-up.

However, according to Helmut that will not be enough for Tigers when they take on other opponents in the biggest global cricket extravaganza.

“No doubt we need to score centuries,” Helmut told reporters at academy premises on Sunday.

“I think you have to score centuries and need to have noteworthy partnerships. Significant partnerships and individual scores will help you to set up a defendable target or chase down a score,” he said.

Helmut said that only batsmen won’t be enough to carry Tigers across the line and bowlers and fielding unit need to complement each other as that will be the key behind earning success.

“It’s not just about scoring more or batting with a high strike rate. It’s also about fielding and bowling at your best.  It’s all about having best defensive balls and best defensive plans against a very attacking opposition,” he said adding that they are trying to get some leg spinners for the future as that is the area they are looking to improve.

“That’s (leg-spin) what we are all working on. All countries have been working on this aspect. Having that spin options and variations help you sneak in a few more dot balls and snatch away some wickets. I think we have got some versatility in our bowling. We have a very different bowling top, we might suit different conditions, but no doubt we are working hard with our spin groups. So, we have more wrist spinners, mystery spinners and more options at our disposal,” he concluded.