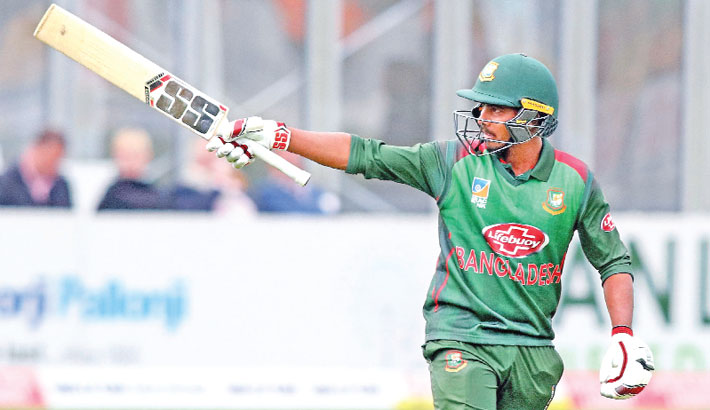 Bangladesh youngster Mosaddek Hossain said that they are confident of doing well in the upcoming ICC World Cup as the Tri-nation Series title has enhanced their self-belief.

Bangladesh finally broke the final hoodoo in a show of unwavering resolve, whacking a resurgent West Indies by 5 wickets in the final at the Malahide in Dublin on Friday.

Having failed to triumph the final on six occasions in different formats in the last 10 years, starting with a heartbreaking two-wicket defeat to Sri Lanka in 2009 in Dhaka, finally the number seven, widely recognized as a lucky number, proved to be preciously lucky for Bangladesh.

The victory sent the cricket crazy nation to the seventh heaven, considering it looked set to be yet another heartbreak for the country when West Indies tightened the noose midway through the innings.

Two youngsters Soumya Sarkar and Mosaddek Hossain Saikat were the key in bringing up the watershed moment in the country’s history. While Soumya Sarkar set the platform upfront with 41 ball 66-run knock, Mosaddek gave the finishing touch in even more gorgeous fashion, smashing an unbeaten 24-ball 52-run knock with 2 delightful fours and 5 sixes.

“We are going into the World Cup with a good amount of confidence and hopefully it will help us perform well in the tournament,” said Mossadek.

“In England the wicket will be much better and if I get a chance to bat down the order and play these kind of innings than certainly it will be good for us,” he said adding that the seniors encouraged him in the dressing room at the break.

Mossadek, who is considered a representative of the next generation of cricketers who are likely to take up the majority of responsibility of the team in the coming days, showed he is quite ready to fill up any requirement as none could have replaced Shakib in the team better than him.

According to Mossadek they were always confident of clinching the title despite the huge total.

“During the break, seniors (Tamim Iqbal, Mashrafe Mortaza, Mushfiqur Rahim and Mahmudullah Riyad) said that the way we batted throughout the tournament if we can stay till the end we can win the game,” he said. “Naturally it feels good to perform and make a contribution in the final but what is more important is that we are well prepared for the World Cup,” he concluded.