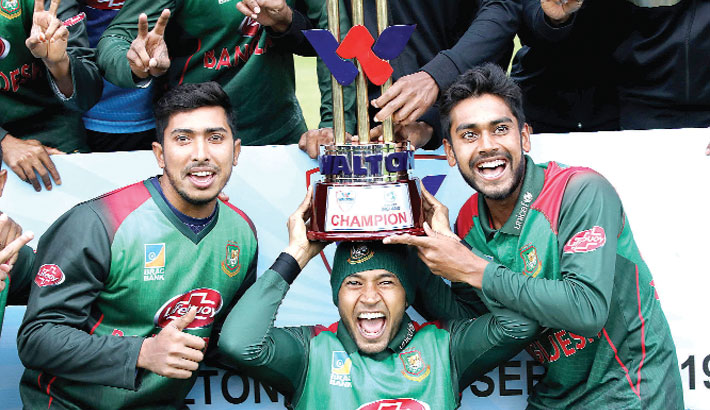 Mushfiqur Rahim along his teammates celebrates victory holding the trophy of the Tri-Nation Series after Bangladesh beat West Indies in the final in Dublin on Friday. AFP Photo

Bangladesh clinched the Tri-nation Series title overpowering West Indies by 5 wickets in their final at Malahide Cricket Club Ground in Dublin on Friday.

Windies ended up with 152 runs losing a wicket in 24 overs but a rain-pause brought D/L method into play and posed an imposing 210 runs as target for Tigers to reach in 24 overs. Tigers comfortably went over the line in 22.5 overs scoring 213 runs losing 5 wickets.

Mosaddek Hossain for all intents and purposes clinched the encounter for Bangladesh creaming Windies spinner Fabian Allen in the 22nd over as he extracted 25 runs from the over.

It was a Soumya Sarkar show for Tigers as the southpaw batsman followed up senior colleague Tamim Iqbal’s fiery 18-runs from 13 balls with his 61 runs. Tamim’s stay was ended by Shanon Gabriel.

On the other end, Soumya smashed 9 fours and 4 sixes in his 41-ball innings.

Sabbir Rahman failed Tigers once again going back to the dugout for a duck but Mushfiqur Rahim played a timely hand scoring 36 runs off 22 balls.

With the match coming down at the wire, Mosaddek Hossain emerged as the saviour for Tigers coupled with Mahmudullah Riyad (19 not out). Mosaddek’s unbeaten cameo of 52 runs from 24 balls was the crucial innings sealing the deal for Tigers.

Bangladesh won the toss against West Indies and opted to bowl first.

Hope smashed a sensational 74-runs innings while Ambris scored unbeaten 69 runs to take West Indies to 152 runs in 20.1 overs for a wicket after rain curtailed the encounter into a 24-over affair.

Both of the openers reached their fifties with the opening stand going past the 100-run mark. Cutter-Master Mustafizur Rahman was brought on to produce a breakthrough but proved to too expensive going for 50 runs in his 5 overs. He took most of the beating from Caribbean openers.

Mosaddek Hossain and Sabbir Rahman each bowled 2 overs while conceding 9 and 12 runs respectively while Mehedi Hasan Miraz was the lone wicket taker for Tigers conceding 22 runs in 4 overs.