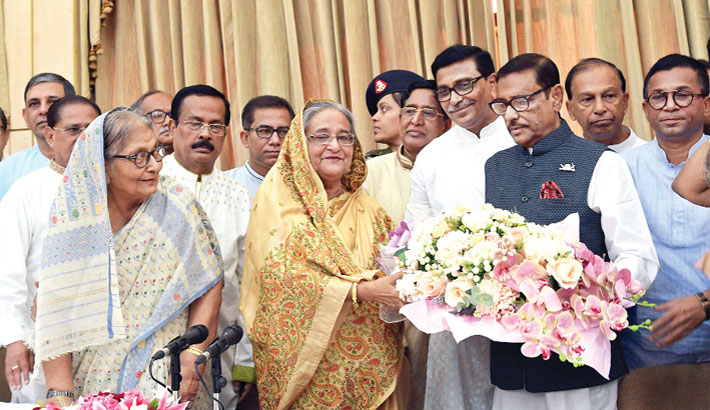 Awami League general secretary Obaidul Quader greets Prime Minister Sheikh Hasina with flowers at Ganabhaban in the capital on Friday on the occasion of her homecoming day. Syeda Sajeda Chowdhury, deputy leader of parliament, and leaders of AL and its associate organisations were present. - PID Photo

The ruling Awami League was rescued by Prime Minister Sheikh Hasina from a deep crisis by returning home from abroad on this day in 1981 amid an adverse political situation in the country, speakers said.

The decision to elect Sheikh Hasina as AL president was right and Bangladesh becomes a role model in the world through her visionary leadership, leaders of the party said.

“Whatever the reason was for electing Sheikh Hasina as Awami League President, but it was correct. She later proved it through her visionary leadership,” AL presidium member Amir Hossain Amu said.

Amu, also former industries minister, made the view while addressing a discussion held on the occasion of Sheikh Hasina’s 39th homecoming day at Institution of Engineers in the capital on Friday.

On May 17 in 1981, Sheikh Hasina returned home from India after nearly six years in exile following the assassination of Father of the Nation Bangabandhu Sheikh Mujibur Rahman and most of his family members by a group of disgruntled army officers on August 15, 1975.

Speaking on the occasion as the chief guest, Amu said Sheikh Hasina is the pioneer of freedom of the country’s people.

“Bangabandhu gave independence to Bangladesh and taste of freedom but his daughter Sheikh Hasina brought cultural, political and economic freedom for the country,” Amu said.

Addressing the function, Matia Chowdhury said Sheikh Hasina has established the rights to food and vote.

“She (Sheikh Hasina) returned home to ensure trial of Bangabandhu’s killers and establish democracy in the country. She also uplifted Bangladesh to a level of utmost development,” Matia said.

Sheikh Hasina. Her firm leadership saved AL from a deep crisis and rescued Bangladesh from the post-’75 devastating situation.