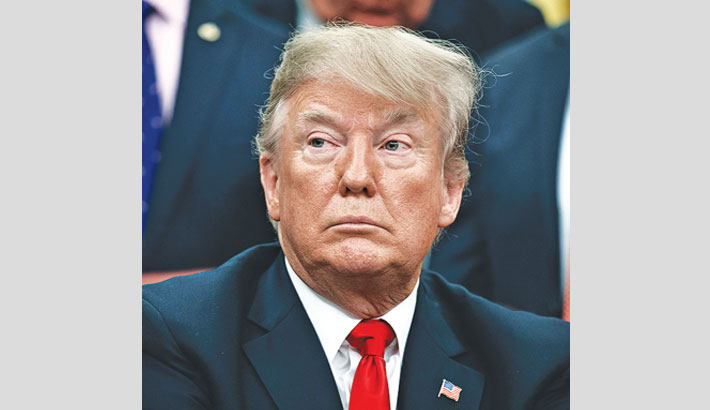 In an address at the White House on Thursday, he proposed moving away from the current system that favours applicants with family ties to the US.

He said border security would be beefed up and a tougher line taken on asylum seekers.

They say the proposed new system fails to offer a route to citizenship for so-called “Dreamers” - hundreds of thousands of people brought to the US as children but who still have no legal right to remain.

In the White House Rose Garden, President Trump said his plans would make US immigration “the envy of the modern world”.

“We cherish the open door that we want to create for our country. But a big proportion of those immigrants must come in through merit and skill,” he said.

“The biggest change we make is to increase the proportion of highly skilled immigration from 12% to 57% and we would like to even see if we can go higher.”

He said immigrants would be “required to learn English and to pass a civics exam prior to admission”.

Criticising the current asylum process, he said: “Our nation has a proud history of affording protection to those fleeing government persecutions.

“Unfortunately, legitimate asylum seekers are being displaced by those lodging frivolous claims.”

The proposals would have to be approved by Congress where Democrats currently control the lower house.

“This dead-on-arrival plan is not a remotely serious proposal,” said Nancy Pelosi, the Democratic speaker of the House of Representatives.

“Are they saying most of the people who have ever come to the United States in the history of our country are without merit, because they don’t have an engineering degree?”

Democratic Congresswoman Pramila Jayapal said the proposals undermined America’s family-based admissions system that she described as “the cornerstone of our country’s immigration policy”.

Although it is unlikely to progress in Congress, analysts say Mr Trump is trying to unite Republicans ahead of next year’s presidential and congressional elections.

In his address he added: “If for some reason, possibly political, we can’t get the Democrats to approve this merit-based, high-security plan, then we will get it approved immediately after the election when we take back the House (of Representatives), keep the Senate, and, of course, hold the presidency.”

Analysts say many business groups are unlikely to be enthusiastic about the proposals because they do not help farmers and other seasonal employers recruit more temporary workers.

Ali Noorani, executive director of advocacy group the National Immigration Forum, said it appeared the plans “would recruit skilled engineers, but not skilled farm workers”. “The fact is, our economy needs both,” he said.

The White House’s plans are also unlikely to satisfy many politicians on the right who want an overall drop in immigration numbers.

Conservative commentator Ann Coulter tweeted that the proposals were “a campaign document, not even a serious bill”.

President Trump has always taken a hard line on immigration and during his election campaign made the building of a wall along the Mexican border a key pledge.Earlier this year he declared a national emergency on the US southern border, claiming he needed special powers to build the wall to halt all illegal migration.

In recent months there has been a surge in migrant “caravans” which involve thousands of people travelling through Mexico to seek asylum in the US.

Trump has responded by deploying extra troops and threatening to close the border.