Many return without tickets 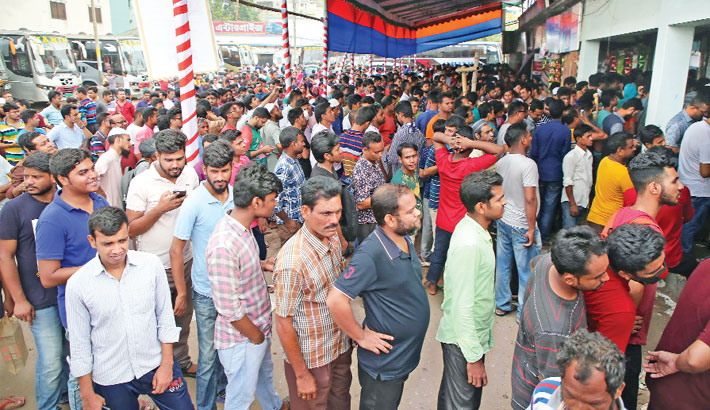 People stand in long queues in front of bus counters at Kalyanpur in the capital on Friday to buy advance bus tickets ahead of Eid-ul-Fitr. — sun photo

Many people, who are planning to go to their village homes to celebrate Eid-ul-Fitr, failed to get advance bus tickets on Friday as most tickets have already been sold on the first day of sale.

People were found standing in long queues at different bus terminals in the capital. A small number of people were able to collect tickets on the day.

The bus operators are selling advance tickets for the days from May 29 to June 4.

While visiting bus counters at Gabtoli, Kalyanpur, Technical, Shyamoli and Mirpur Mazar Road bus terminals on Friday, this correspondent found that most tickets had already been sold and many people were  leaving the counters empty-handed.

Most of the passengers went to buy ticket for May 30 and June 3. Some of them looked for tickets for June 2 and 4. But a small number of people could collect tickets.

Many people complained they did not get tickets as those were sold on black markets.

Some people complained that they suffered difficulties for collection of tickets due to poor management of the bus operators.

Some people alleged that bus owners have reserved some tickets for ‘special and influential clients’.

Those, who got tickets, complained of being overcharged, creating an artificial crisis of tickets.

It has also been complained that the bus operators are charging higher price for AC bus tickets, as those are in great demand due to scorching summer heat.

Abdur Rahaman, a private company employee, said he bought three tickets to go to Ullapara with his family. The bus operator charged him Tk420 for each ticket against usual price of Tk 300.

Ticket for non-AC bus from Dhaka to Naogaon was selling at Tk 590 instead of Tk 400.

Non-AC bus from Dhaka to Kushtia was selling at Tk550 instead of Tk450.

Subject to moon sighting, Eid-ul-Fitr is likely to be celebrated on June 5. Therefore there is huge demand for tickets for three days prior to June 5.

Most bus operators said tickets for June 3 have already been sold. Countermen in the bus terminals said that response from passengers was huge on the first day of ticket sale.