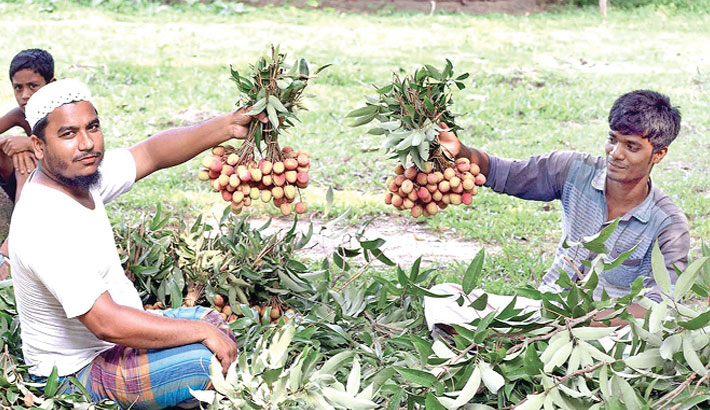 Growers are busy sorting out harvested litchi at Nawadapara village in Ishwardi upazila of Pabna district. The district witnesses bumper production of the juicy fruit this year. The photo was taken on Friday. —Star Mail

RAJSHAHI: Agricultural scientists and researchers urged the grassroots farmers to cultivate the fruit varieties developed newly by Bangladesh Agricultural Research Institute (BARI) as those are favourite to the consumers in general and economically viable, reports BSS.

They mentioned that demand of the indigenous fruit varieties is gradually increasing as people including the richer-class ones are adopting those consciously instead of the foreign varieties. So, importance should be given to boost the local varieties to meet up the gradually mounting demands.

They came up with the observation while addressing a field day on BARI Jamrul-3 held at Fruit Research Station (FRS) in Rajshahi Thursday afternoon. More than 100 farmers and others concerned joined the meeting.

Rajshahi FRS developed the variety in addition to the earlier six ones like BARI Papaya-1, BARI Litchi-1, BARI Batabilebu-3, BARI Kul-1, BARI Kul-2 and BARI Kul-3, which have gained popularity everywhere in the country for the last couple of years in terms of production and farmers earning.

Giving a salient feature of the BARI Jamrul-3 along with its benefits Dr Alim told the meeting that the station had first become successful with the breakthrough of developing the BARI Papaya-1 in 1991 followed by five other varieties and the farmers are using the variety widely by virtue lucrative size, colour and market price of those.

He says Rajshahi and its adjacent areas have been regarded as the country’s most prospective fruit producing region. Production of fruit is one of the major income-generating activities in the region, he added.

In his remarks, Komolaranjan Das said that people are becoming increasingly interested in horticulture and planting various fruit saplings around their homesteads or nearby open spaces.

This trend has created huge demand for saplings of fruit bearing and other trees in the area, he added.

Fruit farming becomes most profitable than other crops in recent years bringing fortunes to thousands of farmers and commoners in the region during the past few years.

In terms of food and nutritive values green and ripe fruits are vital as these are enriched with enormous vitamin A, B, C, calcium and iron which are essential for human body irrespective of age and sex. So, the boosted up fruit farming has become helpful for the society as a whole.