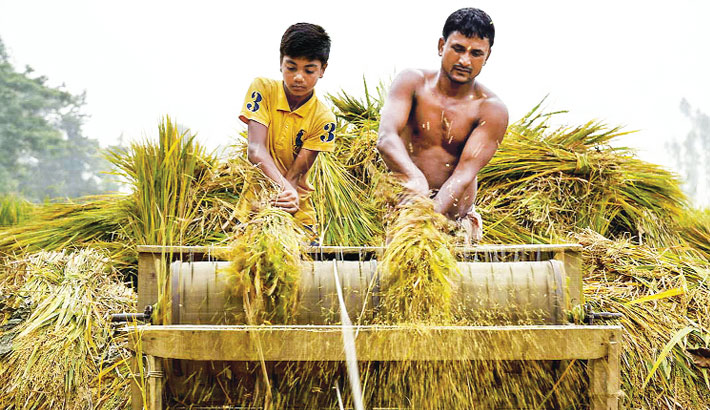 Farmers are busy threshing boro paddy in a field at Badiakhali area in Gaibandha Sadar upazila. The photo was taken on Friday. —Star Mail

BRAHMANBARIA: Farmers have been counting about Tk 300 loss per maund of rice here in the current Boro season due to fall in rice prices, reports UNB.

Farmers said they have been counting huge losses as they are not getting a fair price this year. Mill owners are buying maximum rice at a low price produced in the haor areas instead of the government.

The production cost of per maund of rice including the labourer cost is near Tk 1,000 while its selling price is only Tk 550 to Tk 750 in the local markets, they said.

Ramzan, a farmer hailing from Sarail upazila, said he paid Tk 600 to a day labourer for harvesting paddy with an extra amount of Tk 200 for food.

In addition, he has been waiting for three days at Ashuganj rice wholesale market with 1,400 maunds rice and being forced to sell those at low price. “I have to count a loss of Tk 4 lakh if I sale rice of one boat,” he said.

Another farmer, hailing from Nikli village in Kishoreganj, said he will have to count a loss of Tk 80,000 this year.

According to local sources, frustration gripped farmers as each and every farmer counting losses who bring 50,000 maunds of rice rice daily on an average to Ashuganj rice wholesale market.

Nazrul Islam, a farmer said, the government has fixed price of per maund rice at Tk 1,040 , but they are being forced to sell rice at only Tk 520 to Tk 750 per maund.

District Controller of Food Subir Nath Chowdhury said, farmers should sell rice in their own upazila food godown to get fair price.