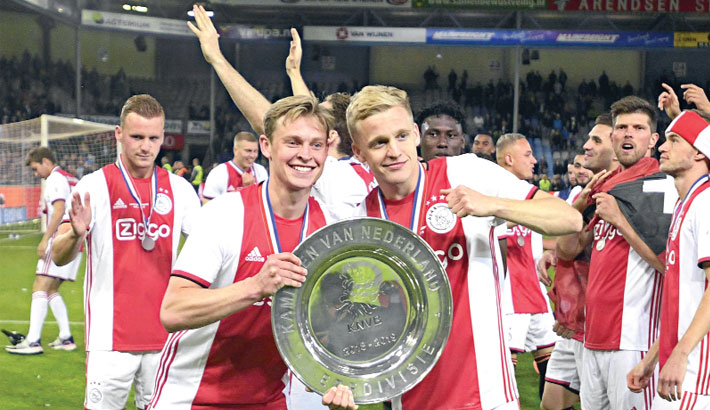 Ajax were crowned Dutch champions for the 34th time on Wednesday after they cruised to 4-1 win at De Graafschap that completed a domestic double a week after their crushing Champions League exit at the hands of Tottenham Hotspur.

Goals from Lasse Schoene, Nicolas Tagliafico and Dusan Tadic, who bagged a second half-brace, saw Erik ten Hag’s side win their eighth league match on the bounce and formerly win the title after effectively sealing the deal at the weekend.

Ajax came into the final match of the season three points clear of closest rivals PSV Eindhoven with a 14-goal higher goal difference after they beat Utrecht 4-1 and the defending champions lost 1-0 at AZ Alkmaar on Sunday.

Those results made a first double in 17 years — Ajax won the Dutch Cup on May 5 — a near-certainty, and in the end made PSV’s 3-1 win over Heracles irrelevant.