‘No clash’ of civilisations amid US trade war: Xi 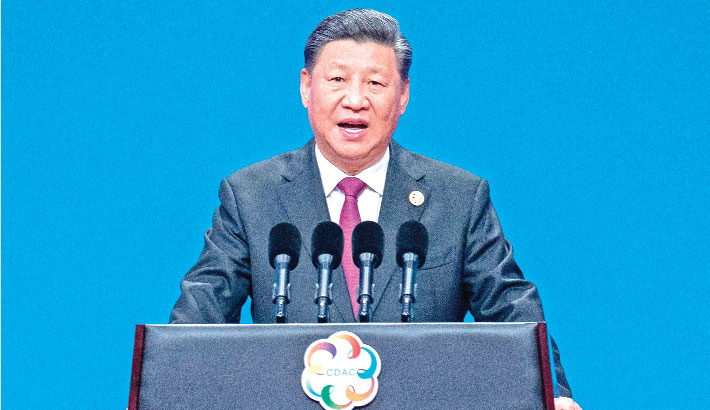 BEIJING: Chinese President Xi Jinping declared Wednesday there was “no clash” of civilisations and denounced racial supremacy as “stupid” amid tensions with the United States and concerns over Beijing’s rising global power, reports AFP.

His remarks came after a top-level US official last month described the rivalry between China and the US as “a fight with a really different civilisation and a different ideology”.

Kiron Skinner, the director of policy planning at the US State Department, put it in racial terms, telling a security forum that China was the first US “great power competitor that is not Caucasian”.

“Thinking that one’s own race and culture are superior, and insisting on transforming or even replacing other civilisations is stupid in its understanding and disastrous in practice,” Xi said at the opening ceremony of the Conference on Dialogue of Asian Civilisations in Beijing.

“There is no clash between different civilisations, (we) just need to have the eye to appreciate the beauty in all civilisations,” he added, without mentioning the United States.

Xi’s speech comes less than a week after trade negotiations between Washington and Beijing took a turn for the worse, with the US hiking tariffs on $200 billion in Chinese merchandise and targeting duties on $300 billion more.

On Monday, China retaliated with an announcement that it would raise tariffs on $60 billion worth of US goods from June 1.