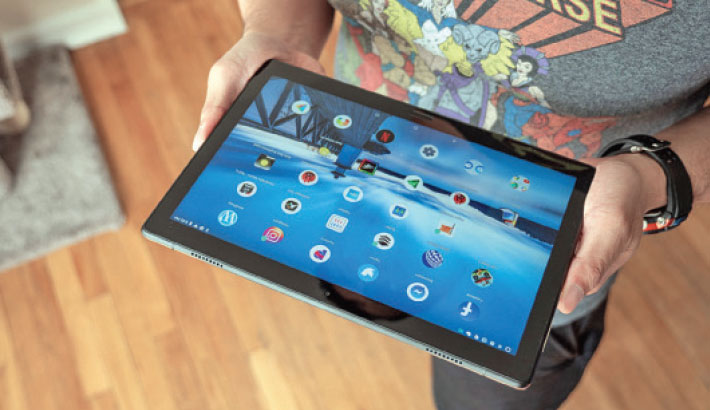 Some people may have reservations about picking an Android tablet over anything else, especially given how fewer and fewer companies are releasing new models. Well, the Lenovo Smart Tab P10 intends on giving consumers something to talk about. It is an Android tablet that also doubles as a versatile Alexa-powered smart display – complete with its very own speaker dock! This is certainly a fresh take for a very ordinary Android tablet.

Adopting the metal-meets-glass design that's been tirelessly used by today’s smartphones, the P10 undeniably has a premium look that gives other rival tablets in the same price range a good run for their money. The only downside to the glass surface is that it makes the tablet extremely slippery while also becoming a fingerprint magnet. Despite that, users will be pleased to find that Lenovo has managed to incorporate a fingerprint sensor beneath the display, as well as a standard 3.5mm headphone jack.

What really makes the P10 notable is that it’s packaged along with a speaker dock, turning it into an Amazon Alexa-powered smart display. There are pogo-pin connectors along the bottom edge of the tablet, which allows the tablet to charge while docked, and when you pick it up, it’s never out of charge.

There’s nothing extraordinary about the tablet’s 10.1-inch 1920 x 1200 IPS LCD display. It suffices for the most part, offering decent-looking details with punchy colours. Viewing angles are okay, but the screen itself is noticeably cold – skewing towards the extreme end with its colour temperature of nearly 8500K. Despite that, it still can get the job done when it comes to everyday things, such as watching videos, scrolling through web sites, and sending emails. It’s essentially your average-looking display.

When the P10 is docked, it automatically goes into show mode, giving you nearly the full scope of features accessible by Amazon’s Fire tablets and the Echo Show. In this mode, you can see news headlines, check your reminders, perform actions on home automation, or stream video via Amazon Prime.