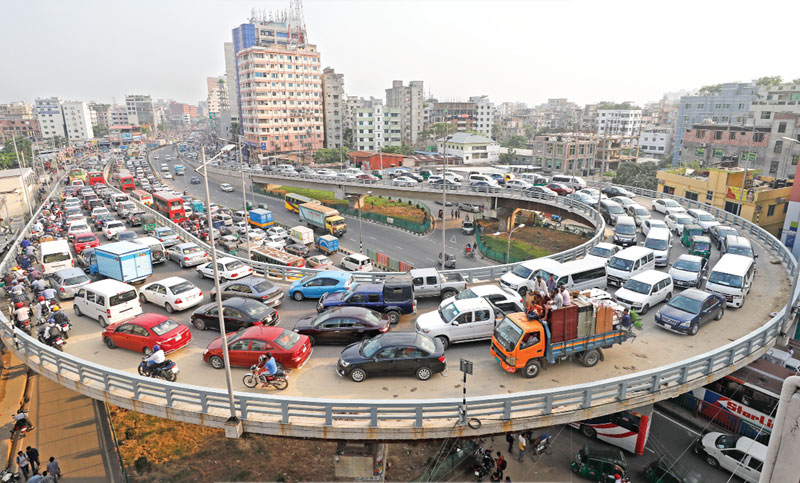 Police have failed to plan its traffic ahead of the Eid al-Fitr festival as once again severe traffic gridlock has made the life of commuters as well as shoppers extreme misery.

The traffic chaos is more during mornings, when commuters rush to work, and in the afternoons, when they return home or go out to shop.

During the rush hour, a distance of three to four kilometres can take about an hour to cover.

Indiscriminate parking of cars in front of shopping malls, narrowing down of roads due to construction work of the metro rail project, defying traffic rules, jaywalking, and road digging by various utility service providers are mainly behind the traffic jam in the city.

Dhaka residents however blamed the police for not preparing a plan to meet the requirement ahead of the Eid festival. “This happens before every eid and the police must plan ahead to ease our lives,” said Monir Hossain, a ride-sharing Uber driver.

The government has fixed the office timings for Ramadan from 9:00am to 3:30pm. Within this time, people want to complete their day’s work and return home to break their fast. As a result, there is huge flow of commuters on the streets at the same time, which leads to congestion.

The road from Mirpur 12 to Mirpur 10, Mirpur 10 to Agargaon and Farmgate to Shahbagh has become a place for heavy traffic congestion, as a large number of vehicles is passing every day when the metro rail project work is underway. Besides, the condition of the road is bad at some places.

Traffic Officials said in a bid to reach their destination early, drivers overtake other vehicles and this worsens the situation.

Habib Rahman, has been working in a private bank, said, “On the occasion of Ramadan, the office time has already brought been forward. I left Mirpur around 7:00 am to go to Motijheel. But due to huge traffic it takes two hours to reach the office. Besides, the weather is very hot. All in all, it is a very bad situation.”

On Tuesday, around 4:00pm on the Paltan intersection, hundreds of men and women were waiting for bus.

Anisuzzaman, a private employee, said earlier, bus could be found only after a short period of time. Now it can be seen that the buses are not available even after hours.

Destinations like Motijheel, Old Dhaka, Moghbazar, Malibagh, Gulshan, Banani and Dhanmondi are nightmares for commuters from any point in the city.

There was a severe traffic jam from Kalyanpur to Manik Mia Avenue and from Dhanmondi 27 to Nilkhet in the morning and afternoon.

Vehicles were waited for hours under Mayor Hanif Flyover in Jatrabari due to the dilapidated road condition, locals said.

Traffic snarls were also reported from the Gulistan, Paltan, Kalrail, Malibgah and Mouchak areas. A similar situation was seen at Rampura to Biswa Road. Vehicles stood bumper to bumper for hours.

Kamrul Islam, another private employee, said “I get in the bus at about 4:00pm from Motijheel and now it is 5:00pm. It took one hour to come to Motijheel from Paltan.”

Mofiz Uddin Ahmed, joint commissioner of Dhaka Metropolitan Police (DMP) Traffic South, said that all offices are closed earlier due to the change of timetable during Ramadan and for that traffic congestion becomes severe especially in the afternoon.

“During Ramadan, everyone tries to reach home at the same time, but there are not adequate free streets compared with the volume of traffic,” he said.

He also said “We have been working hard to reduce sufferings of the people caused by traffic jams”.

At the starting of the Ramadan, DMP’s traffic department yesterday gave 14 suggestions to city dwellers and others to reduce traffic congestion: no driving on the wrong side; no violating of traffic signal; no parking of vehicles indiscriminately, especially in front of markets and shopping malls; commuters should use foot over bridge, instead of jay walking; no makeshift shops should be set up on footpaths, and so on.