‘City Bypass Road’ to be opened for traffic within 2019 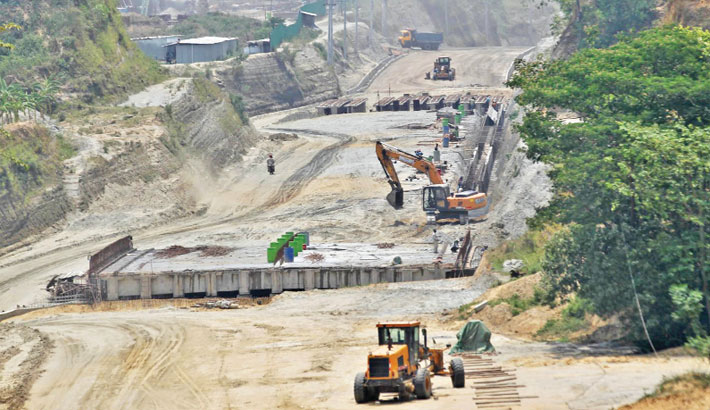 Construction of the much-awaited four-lane 'City Bypass Road' is going on in full swing. The photo was taken from Jungle Salimpur area under Sitakunda upazila in the district. — RABIN CHOWDHURY

With the completion of 70 percent works, construction of the much awaited four-lane 'Bypass Road' to connect the Bayezid Bostami Road in the city and Faujdarhat at Dhaka-Chattogram highway is going on in full swing.

The project officials hoped the road will be opened to traffic in December this year.

Among the major works, land-filling for the six-kilometre road have already been completed while works of bridges and over-bridges are underway, they said.

Mentionable, Chattogram Development Authority (CDA) started construction of the road as a two-lane one under a Tk 172 crore project, also known as Loop Road Project, in the middle of 2015, around eight years after the initiative was taken back in 2007.

Later, the authority concerned prepared a revised DPP to construct the road as a four-lane one with a revised budget of Tk 320.78 core.

Under the project, a total of 15 development works including the six-kilometre four-lane road, a 3,685 square-metre rail over-bridge, 200 meter running retaining wall, six single-span RCC bridges, 6,830 meter running drain, construction and expansion of 11 culverts and removing of 115 electric poles from street will be carried out, the sources said.

Of the works, land filling for the six-kilometre road, construction of 3,500 metre running drain and four culverts, and expansion of seven others have already been completed.

Besides, 75 per cent works of the single-span bridge has been completed while pilling works for rail over-bridge are going on, they said.

While visiting the area on Sunday, it was found that massive works were going on for construction of the four-lane road throughout the project site.

Though the deadline of the project expired last year, the works witnessed slow pace due to complexities over a loop road beside the site of Asian University for Women (AUW) in the Bayezid end, said project officials.

After settlement of the issue and getting permission for carrying out construction through the hilly area, the work got pace again last year.

Mentionable, there was directive in the Chattogram Metropolitan Master Plan for developing planned communication network for turning Chattogram as planned city.

The road would also form a part of one of the three components of outer ring road surrounding the port city.

CDA started construction of the road as a two-lane one under another project during the last caretaker government. Under the project, CDA constructed a huge bridge at the Faujderhat end and a remarkable portion of the road at Bayezid Bostami end.

But, the construction works had to be suspended as the road was going to run through the area where the main campus of the AUW was going to be set up.

As a result, the CDA cancelled the two-lane project and took up the ‘Loop Road Project’ to construct the road with a loop along the outer periphery of the AUW avoiding the university campus, said the sources.

A total of 925 kathas of land will be acquired for implementation of the project now.

The Project Director (PD) Executive Engineer Rajib Das of the CDA said works of the project are now going on in full swing with a target to open the road for traffic in December this year.

The project works were delayed for complexities over the loop road beside the AUW, he said.

The four-lane 'Bypass Road' will help vehicles from north Chattogram areas including Hathazari, Raozan and Rangunia upazilas and those from Kaptai and Rangamati to reach Dhaka-Chattogram highway bypassing the city centre.

Alongside saving a huge amount of fuel cost and invaluable working hours, the road will also ease gridlock in the city to a larger extent, he said.

The road will connect the south Chattogram through the under-construction ‘Bangabandhu Tunnel’ beneath the river Karnaphuli at the Patenga point.

Works of the project titled ‘Construction of Road on the bank of river Karnaphuli from Kalurghat bridge to Chaktai Khal (canal)’ involving around Tk 1978.88 crore was started in 2017.

The organisation also constructed the Oxygen-Quiash Road earlier for easy movement of the vehicles to and from Rangunia and Kaptai upazilas.

Concerned experts said after implementation of the ongoing projects, the vehicles, mainly goods-laden ones, to and from the south and north Chattogram and the hilly district of Rangamati will ply bypassing the city centre.