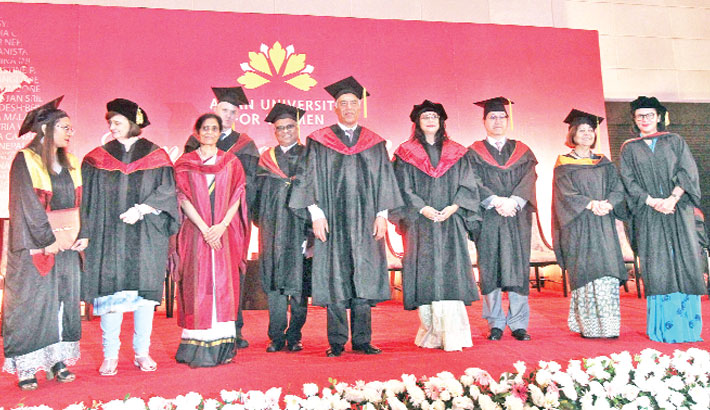 Guests for the 7th commencement ceremony of Asian University for Women (AUW) in Chattogram pose for a photo on Saturday. – SUN PHOTO

CHATTOGRAM: The seventh commencement ceremony of Asian University for Women (AUW) was held in the port city on Saturday.

Addressing the ceremony, the Chancellor Cherie Blair said, “You (graduates) have the talent and the skills, and now the qualifications, to be successfully and service-oriented members of the workforce, change-makers in your spheres and become ethical and compassionate leaders.”

Putting up importance of equal opportunity for men and women in the society, the UK’s former first-lady observed that the university is one the battlegrounds on which women are refighting for their equal right to education.

“Whilst individual dedication to uphold these values is crucial, it is also the responsibility of the lawmakers and the policymakers of the world to nurture and protect these principles,” the Chancellor said.

Degrees of Doctorate of Law and Arts were conferred on the Finance Minister and Chief Advisor to the Afghan President Ghani in the areas of Infrastructure, Human Capital and Technology of the country Humayon Qayoumi, and Singer Professor Rezwana Choudhury Bannya at the ceremony.

Addressing the ceremony, Rezwana Choudhury said though your (students) study ended through the graduation formally, the study will have to be continued in future.

She hoped that the students from different countries will spread the light of knowledge at their respective countries.

A total of 100 students from 12 countries were awarded certificates at the ceremony.

Mentionable, a total of 186 students from 15 countries were awarded certificates through the sixth commencement last year.