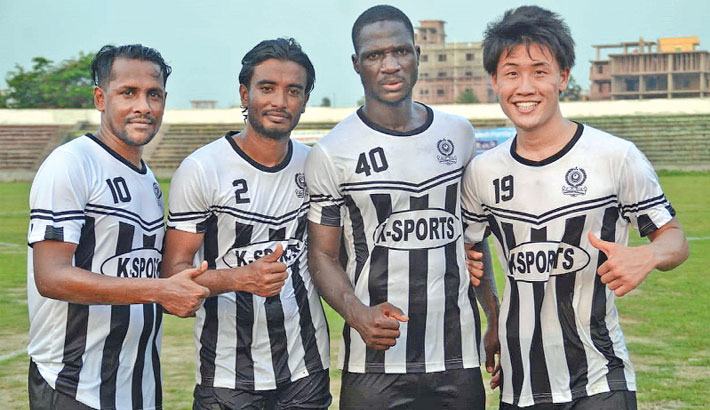 Mohammedan Sporting Club Ltd managed to register another win in the ongoing Bangladesh Premier League (BPL) 2018-2019 as they edged past bottom dwellers Team BJMC by 2-1 goals at Shaheed Bulu Stadium in Noakhali on Friday.

Mohammedan foreign recruits Uryu Nagata and Souleymane Diabate scored for the men in stripes to earn them the much coveted victory.

Mohammedan has been a shadow of their past since long but the quality of football of Mohammedan has stooped so low that bottom placed side of the league, Team BJMC, took the lead against once mighty Mohammedans.

Just in the first minute of the match, Team BJMC’s Asian ace Mukhamedov Otabek scored a sensational goal to give BJMC the all important early lead in the match.

Otabek received a goal-kick and paced ahead with the ball in his control. After going through Mohammedan’s defence Otabek flicked the ball over Mohammedan goalie’s head. The ball swopped in to the nets behind the goalie as the crowd kept looking in awe.

Mohammedan restored parity to the scoreline on the 21st minute of the match courtesy of a fine goal from penalty kick by Uryu Nagata.

The deadlock was finally broke on the 61st minute courtesy of a timely finish from Diabate. With this goal, Mohammedan sealed the deal but it was more of a proof of Team BJMC’s lackings rather than Mohammedan’s skills.

BJMC defender slipped on the ball while trying to go ahead as a Mohammedan midfielder latched on to the unmanned ball and sent a through pass to Souleymane. Diabate then dribbled past a couple of BJMC defenders and scored the winning goal for the traditional outfit.

The match was held at Sylhet District Stadium at 07:00pm (BST).

Arambagh’s players and supporters suffered a great shock tonight since they got a lead at the 42nd minute of the match with Zahid’s goal. And they even held it throughout the match.

But at the 86th minute of the game, Russel’s foreign recruit Raphael managed to open Arambagh’s goal post to level the score line.

The real shock came for Arambagh at the first additional minute when Raphael hit the ground for the second time.

After that, Russel remained unbeaten three match in a row at their 3rd position while Arambagh had to suffer the second consecutive loss.