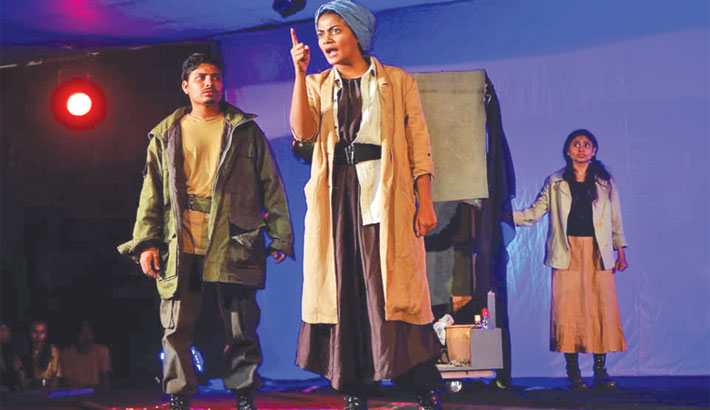 Department of Theatre and Performance Studies of Jagannath University arranged a five-day-long theatre fest from May 2-6, 2019. ‘Spanish Tragedy’, written by Tomas Kids, and ‘Jononi Sahosika’, translated version of Bartol Brecht’s Mother Courage, were staged by the students of the Department of Theatre and Performance Studies, Jagannath University.

On the opening day ‘Spanish Tragedy’, designed and directed by Kripa Kona Talukder, was staged. The play is a classic revenge tragedy set in the Spanish court which is celebrating its most recent victory over the Portuguese and the capture of Portugal’s crown prince Balthazar. Bel-Imperia, the niece of the King of Spain, falls in love with Balthazar’s captor, Horatio. Balthazar, who is in love with Bel-Imperia, is peeved by her lack of interest. To remove his competitor for Bel-Imperia’s hand from his way, he decides that the best course of action is to team up with her brother Don Lorenzo and kill Horatio. Horatio’s murder, in turn, makes Horatio’s father Hieronimo understandably incensed, and his quest for vengeance dominates the rest of the play.

On the other hand, ‘Jononi Sahosika’, directed by Sanjeeb Kumar Dey, was staged on May 4, 2019. The play is set in Europe during the Thirty Years’ War. The performance was designed to create an anti-war sentiment.

At the inauguration ceremony, Kamaluddin Kabir, Chairman, Department of Theatre and Performance Studies, said, “We need an open stage on our premises. We want to organize more festivals and events for the students and the audience of Old Dhaka but we do not have enough space to do that.”

The festival was a colorful one and audiences from different parts of the city came to enjoy the performance.