Trip To Yamaguchi: A Memorable Excursion 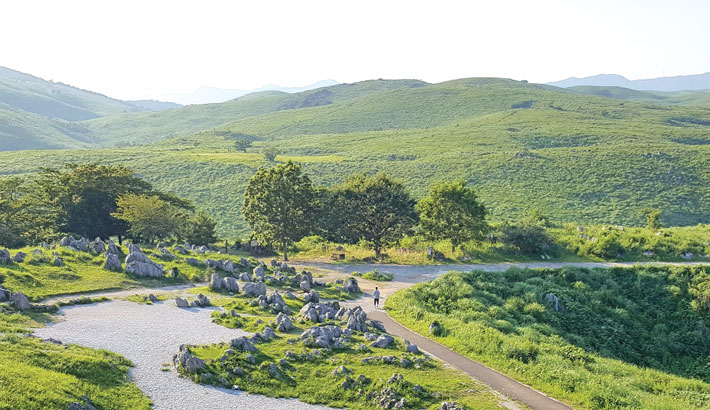 It was in last summer when we decided to sightsee the Akiyoshidai Plateau and Akiyoshido cave area of Yamaguchi in Japan. After approximately two hours' drive from Fukuoka we reached Yamaguchi and first visited Akiyoshido cave. This commodious cave is over 300 million years old and this is one of the longest caves in Asia. Furthermore, now a one-kilometer-long section of the cave is open to the public for sightseeing.

After buying tickets, we entered the cave. At the entrance, there was a stunning view of nature along with the cave's flowing blue water. Anyway, when we entered the cave, we were overwhelmed by not only the colossal size, but also the diversity of the inner parts of the cave. There are some spots inside the cave decorated with a variety of large and colorful speleothems. There is also a flow of water inside the caves; actually it looks like a small river. The most interesting thing is that temperatures never change with the season inside the cave and there are many cave formations inside it. Some of the biggest structures we saw towards the end of the cave included Big Buddha, Lion rock, Gold Column and something called ‘Thousands of Rice Fields’.

After returning from the cave we walked through a stretch of shops and vendors, which included a particularly charming man selling grasshopper figurines made out of grass. He had a conversation with us in Bangla and Hindi. We were completely taken aback and asked him about the reason for learning these languages. He said, “A man can do anything for money.” That man has learnt eight languages only for attracting the tourists.

Afterwards we headed into Akiyoshidai plateau (nearly 4,502 hectares). About 300 million years ago the plateau was a large coral reef. Now this huge land of the plateau is sprinkled with limestone pinnacles, forming a landscape rarely seen in Japan. This plateau is also known for its different seasonal appearances. We drove through the plateau and saw various natural formations along the path, such as terraces of limestone pools filled with water and a lovely stream of cobalt blue water flowing along the path. When we came back, I realized the meaning of the words of Albert Einstein - look deep into nature, and then you will understand everything better.