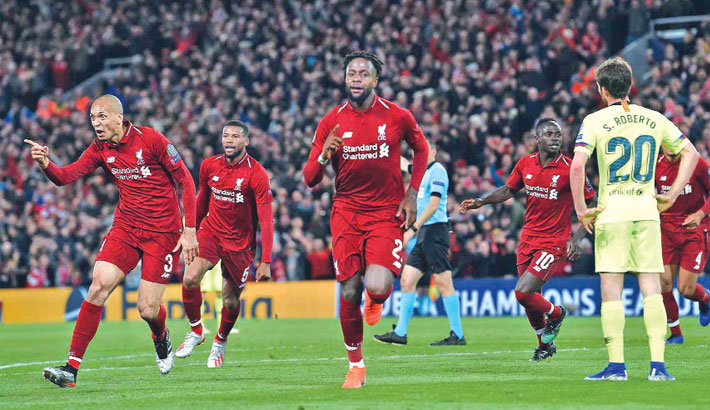 Thus far unable to catch Pep Guardiola’s latest creation in the league, Liverpool took an almighty revenge on one he made earlier, and the history of this great club in European football may never be the same again, reports the Telegraph.

They thought they had written the book on the matter of comebacks in the Champions League – concerning that story you may have heard from 14 years earlier in Istanbul, although this one, it has to be said, bears comparison. Three goals down to the Barcelona of late-era Lionel Messi, his genius declared in no uncertain terms in the first leg, and yet by 10pm the Argentine was heading back down the tunnel defeated.

No team does this in the second leg of a Champions League semi-final without wondering if the hand of destiny is not ushering them down an alternative path to glory to the one they have chased all season. On Monday night, Manchester City edged the Premier League just a little further from Liverpool’s grasp which felt monumental - and then came Tuesday night when the response at Anfield was, quite frankly, stupendous.

How did this happen? Klopp reflected later, “I said to the boys before the game, ‘I don’t think it’s possible but because it’s you we have a chance”‘.

How did they do it with Divock Origi in attack? Ordinarily glad just to be a substitute on a night such as this, he was the two-goal match-winner. The best striker on the pitch on a night when he could not be sure that every opponent would know who he was without glancing at the back of his shirt. Robertson’s replacement, Georginio Wijnaldum, scored goals two and three in the second half from 54 minutes to 56 and yet when the Scot went off at half-time it felt like just another blow that would make the task impossible.

Jamie Carragher, one of the men at the heart of the Liverpool comeback from three down against Milan in 2005, declared it Anfield’s greatest ever night and who are we to argue? Liverpool did it by assuming the role of the team in control even at three goals down and eventually even Barcelona fell thrall to that idea.

Klopp said that he had told his team to attack with everything at their disposal and defend with whatever came to hand. He asked them to be “cheeky” when they could and by a thousand audacious, confident acts they turned the tide in their favour.

They may not win the Premier League but in Madrid on June 1, they will contest the ninth European Cup final of their history, against Tottenham Hotspur or Ajax Amsterdam, their fourth of the Champions League era. The kings of the comeback are back again playing football on the edge and this time they will be favourites against whoever emerges triumphant in Amsterdam on Wednesday night.