Shroud Of Turin: Mystery Or Myth? 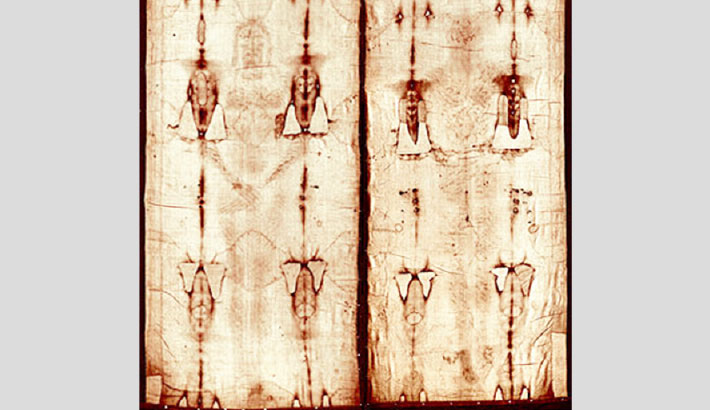 The Shroud of Turin or Turin Shroud is a length of linen cloth bearing the negative image of a man. Some believe the image depicts Jesus of Nazareth and the fabric is the burial shroud in which he was wrapped after crucifixion. Historical and scientific evidence points to it being a medieval creation. It is first securely attested in 1390, when a local bishop wrote that the shroud was a forgery and that an unnamed artist had confessed; radiocarbon dating of a sample of the fabric is consistent with this date.

It is kept in the Chapel of the Holy Shroud, which is located within a complex of buildings which includes the Turin Cathedral, the Royal Palace of Turin, and the Palazzo Chiablese in Turin, Piedmont, northern Italy.

The Catholic Church has neither formally endorsed nor rejected the shroud, but in 1958 Pope Pius XII approved of the image in association with the devotion to the Holy Face of Jesus. Pope John Paul II called the Shroud "a mirror of the Gospel". Other Christian denominations, such as Anglicans and Methodists, have also shown devotion to the Shroud of Turin. Diverse arguments have been made in scientific and popular publications claiming to prove that the cloth is the authentic burial shroud of Jesus, based on disciplines ranging from chemistry to biology and medical forensics to optical image analysis. In 1988, three radiocarbon dating tests dated a corner piece of the shroud from the Middle Ages, between the years 1260 and 1390. Some shroud researchers have challenged the dating, arguing the results were skewed by the introduction of material from the Middle Ages to the portion of the shroud used for radiocarbon dating. However, all of the hypotheses used to challenge the radiocarbon dating have been scientifically refuted, including the medieval repair hypothesis, the bio-contamination hypothesis and the carbon monoxide hypothesis.

The image on the shroud is much clearer in black-and-white negative than in its natural sepia color, and this negative image was first observed in 1898 on the reverse photographic plate of amateur photographer Secondo Pia, who was allowed to photograph it while it was being exhibited. A variety of methods have been proposed for the formation of the image, but the actual method used has not yet been conclusively identified. The shroud continues to be both intensely studied and controversial.